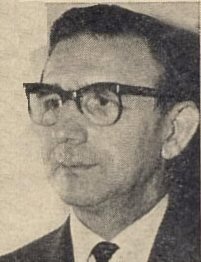 Now the consequences...the shame of suspension . . . and finally the disgrace of TUCexpulsion.

To all COHSE members,

I am hoping to address this letter to you all through the medium of the Journal. Let me make it quite clear at the outset that the views I am expressing are entirely my own personal ones and not those of my branch, although I am quite certain the vast majority of my branch members and thousands of COHSE members throughout the country share my views.

To those of you who do not share my views let me say this: I do not think you
are mad, and I truly respect that you hold your views with just as much deep sincerity as I do mine, although no doubt we each believe the other to be mistaken. The consequences of COHSE's decision not to deregister are far reaching and I believe detrimental. Though there was doubt expressed at Conference by the platform as to how the TUC would act (I had no doubts
and told you so) you now know we are suspended, and that if we continue to remain on the register you must all surely know now that for certain we shall be expelled.

I urge all COHSE members even at this late hour to demand through their regional councils and branches that COHSE draws back from the brink as it were and rethink this whole issue.

Your President in his address to Conference described the Industrial Relations
Act as a vicious act by an incompetent government; how true, how very true, but
it is more than that... it is designed, for all its sugary coating, to destroy and divide the trade union movement under the ambit of the law, with the ultimate aim of state- controlled trade unions. Incompetent this government may be, but I would remind you that they are most competent in their attacks upon the working-class and more than competent in protecting the share-holders, landlords, price-rings and dividend grabbers.

It is quite wrong to look at this act in isolation. It must be judged alongside the background of their continued attacks upon the working people; it was this government who robbed the children of their free milk, put up school meals, introduced the wicked Rent Act and there is more in the pipe-line.

It was a government pf the same calibre who offered nurses a sixpenny wage in-
crease, and a Tory Minister of Health who said he was sick of the sight of nurses in uniform waving banners demanding a better deal.

The whole trade union movement is now fast becoming very much alive to the Government's anti-trade union activities and are acting in solidarity and in unision just like the COHSE motto on the front cover of your rule book, "all for one, and one for all". In the past the TUC has often been criticised for its lack of leadership and in-action, but now the TUC are acting positively, democratically and not running away. COHSE has been affiliated to the TUC, and rightly so, for many many years during which time all our officers and delegations have striven to create a most effective and worthwhile image for COHSE and recent reports have shown how very very successful they have been; to me, it would be most tragic to damage this wonderful image by one mistaken action.

COHSE supports six of the TUC's seven points against the Act. If it is argued, as a reason for not de-registering, that there is doubt as to whether the TUC's vote to oppose the Act was really as democratic as made out to be, then we should be consistent and oppose all seven points. At Conference when debating some of the nasty points about "Salmon" we were told by our Asst. Genera! Secretary most forcibly that you cannot pick out the nice bits and discard the nasty ones, but that you have to take Salmon as a whole; this is consistency let it run through all our actions.

The President in his presidential address to Conference said it was the determined intention to make COHSE and its branches the most forceful and effective voice in the Health Service. I would suggest that this can best be achieved by not wasting our energies attacking fellow trade unionists but by
using all our energy on mass recruitment,attacking policies that harm the conditions of service of our members, and playing a full role as members of a great trade union movement within the TUC and the Trades Councils.

I accept that the Industrial Relations Act is now law and I would not ask COHSE
or any trade union member to break the law. But let us be quite clear and honest: to de-register does not break the law in any way, and it is a human right (whilst obeying the law) to campaign vigorously against any unjust law. To suggest that if we deregister the government will not negotiate with us is ludicrous - you can all see for yourselves, that with over 95% of the TUC members off the register, the government still negotiates with the TUC because they know they are the voice of the whole trade union movement.

One final word-should we not, and I hope and pray that we do, change our
mistaken course and be finally expelled from the TUC, I shall not desert COHSE.I shall remain an active COHSE member, because I believe in COHSE, and I am dedicated to it; but I shall actively and honestly campaign to get us to de-register and so back within the TUC where we belong.

Let us start that active campaign now ,join with me, express your views and get
them discussed at branch and regional level, and so make the COHSE motto "all
for one, and one for all", ring loud and clear.