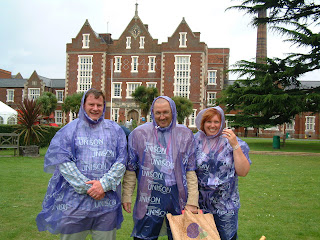 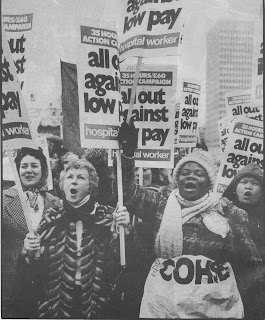 The first three months on 1979 saw the bitterly fought low pay strikes in the public sector. As action by hospital workers, school cleaners and dinner ladies, dustmen and other local authority workers spread in support of their demand for a £60 minimum wage and the 35 hour week, the media vented their wrath in a campaign of unparalleled hysteria. NUPE was labelled a 'fascist union' by the Daily Mail, and the extreme right-wing leader of the Electricians' , Frank Chapple, called hospital workers 'terrorists' in a Sunday Express article.

From the beginning, the public sector union leaders refused to call all-out strike
action — instead leaving it to local areas and sections to take whatever action they saw fit. The inevitable result was that the strike was very patchy. In the best organised areas — for example among local authority workers in Hackney and in (both in ) — there was determined action which led to employers making concessions in , they won the whole claim

But overall, the outcome was disappointing for many of the workers involved. The union leaders recommended acceptance of a 9% offer, plus £1 on account for full-time workers pending the Clegg Commission 'comparability' study, and nothing on shorter hours.

Low paid and part-time women in particular didn't gain much from the strike; the Clegg Commission recommendations gave the lowest grades (90% of whom are women) the lowest rises. Infact, the interests of women were very badly represented in the claim itself, which took no account in its demand for a 35 hour week that many women in the public sector are part time workers who already work less than 40 hours, and receive very low hourly rates. Roughly 75% of the membership of NUPE (the union with the largest number of members involved in the action) is women, but they are totally under-represented at all levels of the union. There's no doubt that this weakened the struggle.

Other divisions also took their toll: 'One of the worst problems we've got is inter-unions rivalry — especially between NUPE and the G&M. In our hospital we held a meeting last week of all four unions to try and stop these squabbles. And lack of information is a real problem. There could be a strike down the road and we'd only hear about it after it was over.' (Margaret Carlin, NUPE nurse, , quoted in Socialist Worker, )

Although there is a growing shopstewards' movement within NUPE and the public sector generally, this inter union rivalry and the lack of national and local co-ordination resulted in the better organised areas remaining isolated from each other, and unable to support the weaker areas. And this absence of a strong nationally co-ordinated movement of the rank and file made it much easier for union leaders like Alan Fisher to brush aside calls for all-out strike action.

It also meant that there was no organised force within the strike putting over
socialist answers to the real worries facing many of the low paid public sector
workers. The most pressing of these was the fear that if the employers conceded
the full claim, it would lead to a massive loss of jobs — especially part-time jobs - harder work, and worse services. 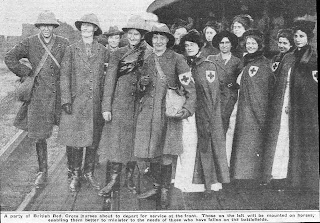 Red Cross Heroines who will ride to the battle front

When there is a lull in the screaming of the shells, and the last embers of a battle are being extinguished, it is then that the Red Cross heroes and heroines come out to assist those who had suffered in the fight. Brave men and women they are, taking their lives in their hands, and risking the stray bullets that fly around, in order to cheer the. last moments of dying, men, or bear the living to the shelter of a hospital.

The State, of course, provides aid for our sick and wounded warriors, but the British Red Cross Society supplements it, organising and supplying extra hospital accommodation, nursing and medical service, and all the little luxuries and comforts which mean so much to the invalid on his bed of pain.

The Duke of Devonshire has generously; loaned that substantial-looking building, in Piceadilly, London—Devonshire House—to the British Red Cross Society as a

temporary headquarters for the organising staff, many of whom are voluntary workers. Queen Alexandra and Lord Rothschild, are heading an appeal for funds to carry on the noble work and patriots by the thousand have subscribed. In addition to the gifts of money and personal service, many people throughout the country, have offered to accommodate wounded soldiers in their homes.

Motor-cars have also been temporarily presented to the Society by their owners. Mrs. St. Clair Stobart, whose portrait appears opposite, desired to organise a Red Cross Hospital in Brussels, but she was arrested by Germans, and nearly shot as a spy. After many hardships she reached Holland and safety.

Note:
Mrs St Clair Stobart, founded the Women''s Sick and Wounded Convoy Corps that worked with the Belgian Army, also worked for providing health care to civilians in France and Serbia during the war, 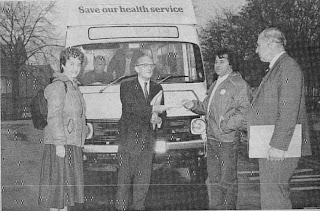 If it's Wednesday it must be Wigan

Since then they've travelled more than 12,000 miles together round Britain in a converted ambulance as the spearhead of the Labour Party's NHS campaign.

They've visited 206 places, often starting at 9 am, finishing only at the close of evening meetings, sometimes seven days a week. The ambulance was designed to take the Labour Party's campaign to the grassroots.

The aim was to provide flexibility for local work, and to maintain a coherent national link between what could otherwise have been a series ofdesparate fights to save local services. It was also designed to provide a strong visual aid for publicity, although this was not the top priority.

It was clear from the start that if the party was to put over socialist arguments for a nationalised health service-as distinct from the liberal sentiment that the NHS is 'a good thing'-it could not rely on the media True the ambulance had its problems.

In the North it was moved on by a traffic warden for parking on double yellow lines. It was banned from one town centre by the Tory council. In another an irate shopkeeper threw a bucket offishwater into it. For Tom and John the tour has been a lesson in political campaigning. Early on they discovered that what the public really wanted was information. Privatisation was an issue which particularly aroused public interest. People were concerned about the contracting out of ancillary services as well as the long waiting lists for NHS treatment.

The two drivers tested the ground in Tory strongholds, and found that on a popular issue like the NHS, they could at least talk to people and raise some interest.

Whether such a populist approach could actually win votes is another question. At any rate the party's Euro Unit is using an open-topped double decker bus for its campaign; and have you heard what's planned for the anti-cruise campaign... ?