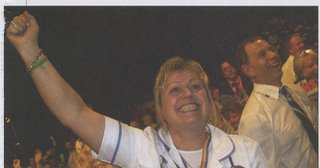 Christine Wilde,Midwife Elected UNISON President 2005-2006
Christine Wilde, a midwife, has been elected president of UNISON by the union’s ruling National Executive Council (NEC). This is the highest lay position in the country’s largest and fastest growing union. Christine has been a longstanding member of UNISON since its creation in 1993. She joined founder union COHSE (Confederation Of Health Service Employees) in 1976.
Christine has held several positions in the union including COHSE branch secretary, chair of the Isle of Wight healthcare trust branch and UNISON vice president. In 1988 Christine was the first woman to become a member of COHSE’s NEC. Christine has also been a member of the Labour Party NEC.
Christine was born and raised in Blackburn, Lancashire. She was educated at Blakely Moore School for girls and went on to train as a midwife at Queens Park hospital, Blackburn. Christine now works and lives in the Isle of Wight, as a midwife. She has two grown up sons, Jason and Greg and two grandsons, Connor, 5, and Craig, 2.

Christine is dedicated to midwifery. She said:“I love to help people; it’s such a rewarding job. I enjoy working with women and the job really stimulates me.”As President, Christine has two main aims, one in the UK and one overseas. In the UK she wants to improve working conditions for public service workers. And overseas she wants to establish a shelter for orphaned children who have lost their parents or carer because of HIV/AIDS.Commenting on her future plans in UNISON Christine said:“I want UNISON to grow physically, I want to make working policies with other unions and most of all I want to establish a shelter for children who have lost everything, children that have been abused or abandoned because of ignorance and power.”

Dave Prentis, General Secretary of UNISON said:‘I am pleased to welcome Christine as the new president of UNISON and I look forward to working with her on the future direction of the union.’
Posted by Michael Walker at Monday, October 23, 2006