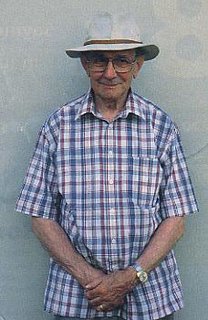 Bernard was born on the 25th September 1915 at 63 St John's Wood Road, London. the first of two sons the other being Edwin Charles Morgan.

His father was George Herbert Morgan a Londoner who started his employment with the Metropolitan Railway (underground) as a booking clerk. Bernard's father worked his way up through the ranks to become an Accountant for the Metropolitan Railway, he was also a very staunch member of the Railway Clerks Association (now the Transport Salaried Staff Association TSSA) Ladbroke Grove branch, his father was also a life long member of the Labour Party.

Given Bernard's father's occupation it is maybe not surprising that his father meet his mother Ada Mary Charles at a railway booking office. Bernard's mother was originally from Oakington, Cambridgeshire, but moved to London to become a Midwife at Queen Charlotte's Hospital, Edgware Road.

Bernard was born at 63 St Johns Wood Road, opposite Lords Cricket Club, however the house was bombed by Zeppelins during World War one.

Bernard left school at approx 17 and a half to 18, and like his father started work for the Metropolitan Railway as a Railway Clerk, but when the London Passenger Transport Board took over the running of the Underground Bernard was made redundant, But, he was able to get a job back with the Underground railway service as a relief booking clerk, a job he did not enjoy Bernard states " I didn't like it, I was a bit of a snap head".

Much to his fathers regret Bernard left his relief clerks post and sought a job working in the accountants department of the aeroplane makers De Haviland at the companies aircraft factory at Burntock, Edgware, North London in the days when Edgware was a major airport, during this period of the 1930s Bernard became a steward for the clerical section of the Amalgamated Engineering Union (now AEEU) and he was the unions first clerical steward in the factory.

De Haviland was a very well union organised factory , Bernard recalls "when the convenor rang the bell everyone shut down their machines and moved to the agreed assembly point"

Latter Bernard was victimised and sacked by De Haviland which lead to a strike at the factory, because of the anti strike legislation at this time, the strike was refereed to as "unpaid leave" the strike lasted a couple of weeks, meanwhile the AEU paid Bernard victimisation pay and also found himself blacklisted by all Aircraft companies. The AEU however managed to "manoeuvre"Bernard into a job as a shop fitter, a job for which he was supposed to have experience and qualifications and of which he had non, But due to the efforts of the AEU he began employment as a shop fitter for Buck & Hickman.

But within a few weeks of starting his employment he was called up as a conscript, the Second world War had caught up with Bernard., he was sent to Bradbury Barracks, Hereford with the North Staffordshire Royal Artillery, as a ac ac, searchlight, gunner on the British mainland.

His training came to the fore when on D Day plus one he and his colleagues were collected from Brighton and taken to Southampton were they boarded boats for France as support to the American 6th Air force ground forces at Arananches and Normandy.

Bernard says the fighting "made my hair stand on end" but as they moved forward Bernard was wounded by a bomb blast, he recouped in an American Field Hospital for three weeks, after which he rejoined the Medics and ended up at the end of the war in Grossilseda, Germany.

He was then posted to No 6 General Hospital in Hanover where he worked in a VD Clinic serving mainly American service men until he was de mobbed in early 1947. On his return to Britain he found it hard to get a job, so he returned to Germany to serve in the British Control Commission which Bernard states "worked to get Germany back on its feet" his job was secretary to two top British industrialists who were involved in establishing the first Hanover Industrial Fair on which "a fabulous amount of money was spent".

In 1951 he returned to Britain where he realised he "had to start again" to rebuild his life. So in 1952 he embarked upon a career in nursing, initially as a Student Register Mental Nurse at Tooting Bec Hospital, South London, he lived locally in digs, he joined COHSE almost immediately after starting his training and within a few months had become a steward and within eight months Bernard states he was Branch Secretary, However this was probably not until 1954, Bernard went to his first COHSE national Conference in 1952. He took over the Branch Secretaryship from Michael O'Reilly (known as Sir Michael) who was considered a bit of a live wire.

The Tooting Bec branch of the National Asylum Workers Union a forerunner of COHSE was established in April 1913 but seems to have collapsed during the First World war being re established in 1918.

Bernard became a Staff Nurse, then Charge Nurse and the assistant Matron, Senior Nursing Officer, then he opted to become head of the Industrial Therapy Unit at Tooting Bec Hospital.

Bernard states that the most important resolution he ever moved at a COHSE conference was a resolution calling upon the union to re enter the TUC after we had been expelled for complying with Conservative anti union registration legislation in the early 1970's. To move resolution 13 at the 1972 conference Bernard had to leave his sick bed, on his first attempt he was un successful Bernard believes however that the resolution was carried, he states "I was so ill, I should have called for a card vote, i'm certain it was carried "the next conference he was more successful".

Bernard blames the General Secretary Lynch and the President Vickerstaffe for the debacle and expulsion from the TUC, which was probably one of the worst episodes in COHSE's history. Bernard in the Journal in September 1973 now an NEC member stated correctly that "We have suffered the greatest ignominy and disgrace known to a trade union" he went on to call say "No organisation can be changed from without, only from within so for goodness sake, get your branch to express a view".

The group leading the campaign to re affiliate to the TUC was Bernard, Dan Moriarty (Region 6 NEC St Bernard's Branch Secretary)

Sid Ambler (future President) of Sid Ambler Bernard states he was "left wing in those days". Bernard was an NEC member of COHSE for 15 years representing Regions 6, 13 and 8 as Region's were re organised.

The states "I believe the only way to change the Labour Party is to change it from within, Socialism is the only way forward". "and he went on to say "Labour Governments are not utopian, they make mistakes, however its up to you and I to keep them on their toes".

Bernard believes, unsurprisingly that the establishment of the National Health service was a "fantastic achievement"

On Amalgamation with NUPE & NALGO Bernard states I have always supported merger, I have always believed in the trade union motto "strength in unity" he found however that it was utterly opposed by the COHSE Full Time Officers who wanted to protect their own interests.

Bernard speech to the 1992 COHSE conference on the final Merger debate, Bernard (wearing his now famous red trousers) gave the most impressive speech, so impressive that the insuring personal attacks by those opposed to the new union attacked Bernard personanally on his age, which only served to re enforce the reasons why we were voting in favour of the new union. On the Unison Bernard has stated "We have to build a completely new union"

Bernard did not vote for Albert Spanswick in the General Secretary election's of 197? ("I think I voted for David Williams) Bernard believes that Albert Spanswick "Blossomed" and became "COHSE's best General Secretary" he was "always their leading us, although I may not have always agreed with the way he lead" vote 105 to 21 strike action began 1st April - 800 of 1,000 staff on strike  by late afternoon 2nd April management agreed to "status quo"

In April 1976 Tooting Bec hospital COHSE spearheaded by Bernard organised one of the first indefinite strike action taken by nurses in Britain, the strike lasted two days with no emergency cover and secured a victory. "no other way to retain the practices it had built up over twenty years and which management wished to eliminate"

On the 1982 dispute, Bernard believes their was a lack of leadership and believes we should have taken firmer action earlier on in the dispute. But Bernard did not believe in Emergency cover the union "should provide humanitarian cover, decided by those working in that area"

Bernard believes the 1988 Clinical Grading agreement was a "Major blunder, we walked into a trap" he explains. (Many would now disgree with that popular view at the time)

Bernard has one son John by his first marriage, John is an ASLEF Train Driver on Southern region now in his 40's. Bernard's second marriage was to Una a Jamaican COHSE member working at Tooting bec.

Bernard retired from the Health Service 66 days after his 65th Birthday, but when he is not gardening he still finds time everyday to go into the union office at Tooting Bec to carry out his Branch secretaryship duties

Bernard was simply one of the greatest COHSE activists

BM Interview notes with MW just after his retirement