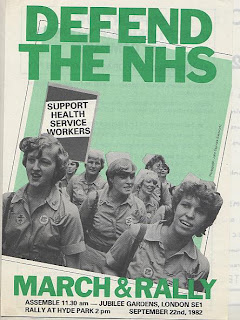 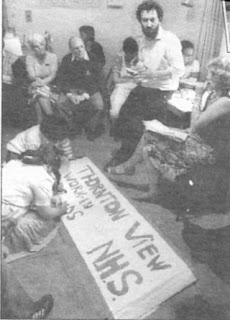 The occupation (Work-in) of Thornton View geriatric hospital, , began over a year ago, on . During the NHS debate at this year's Labour party conference nurses and supporters of the occupation draped a banner from the gallery proclaiming, "Save Our Hospitals". This action lead the chair, Eric Heffer, to observe, "I hope the state does not move against them as it has against the workers at Cammell Laird".

Labour Research examines the background to this long running occupation.
view Hospital is an 82 bed long stay geriatric hospital located near the , just outside . In the past few years it has had wanted to save £700,000 by shutting down two hospitals, one of which was Thornton View. During the year long campaign, prior to the occupation, the substantial amounts of money spent on it by Bradford DHA. For most of the elderly patients at the hospital it is their home. Aged 65 to 95 years they have been at Thornton View on average for 7 years.

Bradford DHA had many letters of protest sent, a petition of 30,000 including 55 GP's and the support of the Tory, Liberal and Labour groups on the District Council together with lobbies and demonstrations — all to no avail.

So at on Friday night a bold, and well planned, occupation began, made official by both NUPE and COHSE within the first week.

Whilst the main purpose of the occupation was to protect the rights of elderly people with no power (studies have shown that within 6 months of the closure of St. Benedict's geriatric hospital (after an occupation by staff) in some 30% of the patients had died), the fight was also to save 95 NHS jobs. As COHSE steward Betty Elie stressed, "We're not stupid, we know that once this hospital closes we don't stand a chance of getting new jobs".

As long as there are patients in the hospital legally workers legally workers cannot be locked out or lose pay during occupation of NHS premises. Thornton View is the only hospital occupation to exclude management. The occupation committee of nurses, domestics, porters, local GP's, relatives, other trade unionists and members of the local community joined together to organise every aspect of the struggle at Thornton View Hospital.

They have upturned the management structure by running the hospital themselves. Most importantly, it has forced a political consciousness on the Bradford Community Health Council, and the District Health Authority who refuse to accept that whilst willingly acting as agent of the government they are also being political. 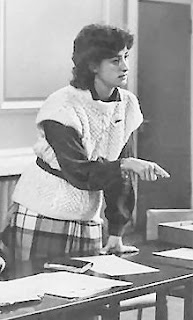 It is now 20 months since the Health Authority decided to close View, and they still have not been able to implement that decision, despite the announcement on of the minister's decision to approve the closure. That in itself is a major achievement.

Because the patients are elderly the numbers are slowly dwindling (current number of beds occupied 45), there is a feeling that management are playing a waiting game and will use this as an excuse to close the hospital.
But the occupation is not defeated and the Occupation Bulletin (entitled Thornton View Forever) ends "On now to our 2nd Birthday folks". Money and messages of support to: , c/o The Occupation, Clayton, Bradford.
ALL GMC DELEGATES, WARD SECRETARIES, LABOUR COUNCILLORS - BRADFORD WEST. (1983)
URGENT: VIEW HOSPITAL WORK-IN
YOUR HELP IS NEEDED.
As you are probably aware by now on the staff at beg a work-in to prevent the closure of this 82-bed geriatric hospital.
Because this is a work-in , it is VITAL that supporters from the local community take an active role in helping the staff "man" the picket-lines the staff cannot be
expected to work their normal hours (which are often very long as well as very exhausting), fulfill their family needs(most of the staff are women, several are single parents) AND ,then, Without outside help run four picket-lines
Bradford West Labour Party has held an emergency executive, at Thornton View and we are urging all are members as a matter of the utmost urgency to help on the picket-lines; the pink leaflet enclosed gives more details on this, as well as a contact phone-number.
We also decided:
(a)To ask all our members to support the demonstration on I0th September (leaflets enclosed) and to get signatures for the petition (copy enclosed)
(b) to donate £20 from the Constituency to Thornton View.
(c) ask ward secretaries, and trade union officials on g.m.c. to:
(i) contact their membership, where possible by phone, and inform them of the work-in and the vital need for their active support.,
(ii) arrange for financial donations, messages of support, etc. If you would like a speaker at the branch meeting the Occupation Committee will be only too
delighted to send one for this and any other information you require phone 882007 Extension 47
(iii) if possible, arrange a block booking i.e. a day and a time when you
can guarantee, and transport up to the picket-line or more of your members on a regular basis.
At the ward is taking Wednesday till , 0dsal is doing Saturday (a.m. to p.m.),Queensbury Tuesday , and Wibsey Thursday 8 till 12 pm. We realise that, practically ,its easier for block bookings to be in the evenings - the earlier the better i.e, 6 or 6.45 rather than 8.
THE OCCUPATION IS LIKELY TO GO ON FOR ANYTHING UPWARDS OF FOUR OR FIVE MONTHS: IT IS VITAL TO DRAW IN AS MANY PARTY MEMBERS(AND OTHERS!) AS POSSIBLE TO DO PICKET DUTY, EVEN IF ONLY FOR TWO, THREE OR FOUR HOURS A WEEK
The Tories are going to cut the health services to shreds - if we let them.
The Thornton View Occupation is the first major attempt to fight back since the General Election. Your active support is vital - please make every effort to support us.
Yours Fraternally
Reuben Goldberg (p.p. Lester Hall & Bradford West Executive.)
FOR MORE INFORMATION: Phone 882 007 Ext. 47
CORRESPONDENCE : VIEW OCCUPATION COMMITTEE, c/o. The Resource Centre, 93, Little , Bradford BD 5
Note
Undoubtedly the key local person in to campaign and secure the logistical support for the Occupation of Thornton View Hospital was Alex Corina, Betty Elie COHSE Hazel Ward NUPE Nursing staff at Thornton View Hospital, Bradford.
Management should have been suspicious prior to the Occupation, as when nurses showed Alex Corina and Andrea C around the hospital they signed in the visitors book not only under pseudonyms but also with job titles that referred to "occupational health"
The first job of the occupation committee was to evict the Nursing Officer and examine the (confiscate) the files on the union in her office and make her office the occupation headquarters
The occupation prior and during the occupation always secured the support of the patients relatives
As with other hospital occupations their was always a number of pickets sleeping in
The picket was actually on the front gate halfway down the lane in a very cold and exposed site 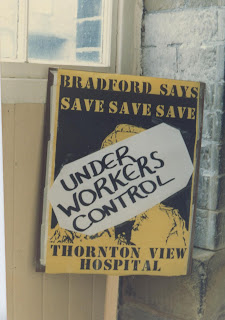