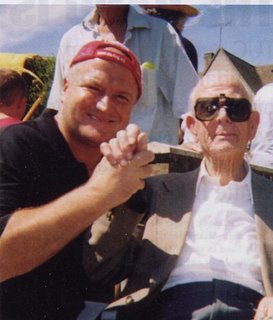 Howard "Andy" Andrews, 99 years old, who served for two years as a front-line medical worker with the International Brigades during the Spanish Civil War, will address the Tolpuddle Martyrs Rally on July 16th.

Dave Chapple, member of the South West TUC Executive and President of Bridgwater Trades Union Council writes this tribute to him:

Howard Andrews was born in Kilburn, North West London, in February 1907. He joined the Royal Army Medical Corps at 16 and in 1924 was posted to Quetta, Baluchistan, British India. He never forgot the poorest Indian women of Bombay-some of them with babies on their backs- loading coal onto the steamships, and when he left the army in 1931, he immediately addressed street meetings back in Kilburn, telling people about the real British Empire. In the year of the General Strike, 1926, Andy was posted with an Indian regiment to Shanghai, to protect British "interests" there, during the massacres of Chinese communists and trades unionists by Chaing-Kai Sheck's right-wing Nationalist troops.

In North London in the early 1930's, Andy joined the Independent Labour Party and then the Communist Party. He was present when marches against both mass unemployment and Mosle's Blackshirts were viciously attacked by the police- on one occasion, during a Mosley rally at Earl's Court , Andy was thrown down flights of stairs and beaten up in full view of the police, who stood by and smiled.

In August 1936, months before the International Brigades were formed, Andy rode to Spain in an Ambulance donated by the Spanish Medical Aid Committee. He stayed in Spain as a front-line hospital worker for over two years, attached to both British and other International Brigades, and working with medics like Tudor Hart and Sinclair-Loutit.

The work was hard, tiring, and dangerous. Andy served at field hospitals during some of the toughest battles of the war, including Teruel and the Ebro. When the final great battle of the war, the Ebro, was lost, Andy and other nurses had to be ordered by a senior officer to retreat back across the river. On more than one occasion, hospitals Andy worked in were attacked by airplane or shell-fire, and he still remembers diving behind a wall to escape an Italian plane's machine gun bullets and hand-grenades.

In 1939 Andy rejoined the army and was sent to France in the Royal Artillery, being lucky enough to escape with his life at Dunkirk when German planes were straffing the beaches.

Always a trades unionist, when Andy moved to Taunton in 1955 he established a Branch of COHSE at Taunton hospital, and was Branch Secretary and Taunton Trades Council delegate until he retired at the age of 65 in 1972.

In 2006 he has joined the Taunton Peace Group, rejoined the Communist Party, and is very active on the streets of Taunton, handing out leaflets protesting against the renewal of Trident nuclear missiles.