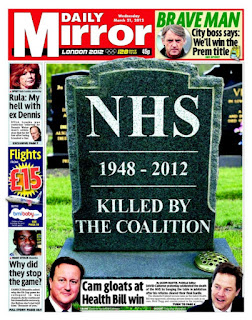 Liberal Democratic Ministers in the Tory led Coalition "banged the table" during Tuesdays Ministerial meeting to show approval at the passing of the NHS & Social Care Bill.

The Bill is opposed by the majority of NHS nursing & medical professionals, health unions, patients groups and the public. Despite the massive opposition to the Bill the Tories have pushed through radical reform of the NHS which will see wholesale privatisation of sections of it, all with the support of the Liberal Democrats who once championed support for the NHS.

The truth is without Liberal Democratic support this attack on the NHS would not have succeeded, it is doubtful that a Conservative majority Government could have got this Bill through but the Liberal Democrats have acted as a useful shield to the Tories privatisation anti NHS agenda. As for Shirley Williams she has shown herself willing to sell her deepest convictions to remain loyal to a failed Government and Party, every report of Shirley Williams life will refer to her total miscalculation and blinkered response to the NHS & Social Care Act, unlike her "Gang of Four" colleague Dr David Owen, who has been impeccable in his opposition to the attacks on the NHS.

As with the the Poll Tax, opposition to the NHS & Social Care Act will if anything intensify, patients every day experience will show how dogma and not ethics have driven through this Bill. We will win if we remain committed and focused in exposing the many failings of this Act.

Keep up the pressure.
We Are Many
They Are Few
Posted by Michael Walker at Wednesday, March 21, 2012 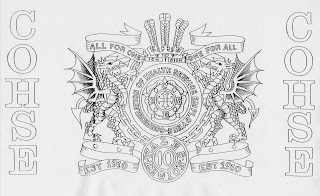 A number of cases of staff being forced to work excessive hours or on the wrong grades were reported.

The Region was concerned about the use of overseas NHS staff.

the Regional Secretary Mc Carthy stated
"There are still within the health services, a large number of employees, who are unorganised each and everyone of us have a responsibility in this direction, by example, and force of argueement we have to convince these employees that it is in their interest to organise within a specialist trade union and that union is COHSE".

membership in the Region increased by 67 in the year.

The Regional secretary reported that as a union official he had in 1955 carried out the following duties.
509 visits to COHSE union branches
68 meetings with hospital management
Undertaken 13 appeals
Attended 12 regional union meetings

Recruitment in Ebbw Vale and North Monmouthshire was being carried out by G Pyle, COHSE District Secretary.

New branch of COHSE established at Pension Hospital, Chepstow, Monmouthsire. This was due to the efforts of the long established branch secretary P. Powell at Chepstow branch.

COHSE branches were demanding in 1956

COHSE branches were actively discussion banning overtime and working to rule strikes in furtherance of their claim for a 44hr week and substantial pay rise for nurses.

It was reported at may 1956 regional council of COHSE Wales that staff in the laundry departments (Tredegar COHSE branch) were demanding that staff who operated steam iron presses should secure an enhanced or plus rate of 3d per hour The region agreed .

Council noted that T.G. Westcott (Tommy G Westcott - Bridgend - national asylum workers union) was due to retire after long service to COHSE/NAWU and the NHS.

COHSE had secured the re instatement of nurse Mrs M. Wakely Blaina hospital .

At theDecember 1956 it was reported that Mr I Adams, Brigend (Mental) hospital branch ex regional council member had died

It was reported that the COHSE national ban on overtime in furtherance of reduced hours and improved pay had been 100% effective in Wales, the branch that had carried out the selective action being Bridgend from 1st until 28th September 1956

It was reported that Alderman Sydney Mitchell OBE was now President elect for 1958 Welsh regional council of Labour (Labour Party).

COHSE was conducting recruiting at Rookwood Hospital and a new COHSE union branch at Brecon Hospital (Powys) branch had been established.


It was reported that a national ballot of (mainly nurses) in mental hospitals and mental deficiency hospitals(mentally handicapped) had resulted.

Cefn Coed branch had written to branches in the region urging support for Rainhill Hospital (Lancashire) "sit down strike" in support of improved pay and reduced hours for nurses.

Issues for local branches included hospital accomodation rent rises and imposing of new rotas, such as at Blaina.

A big recruitment campaign was in place at St Woolas, and Royal Gwent hospital 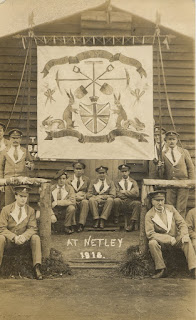 Netley Hospital, Southampton was a military hospital during World War 1, the main hospital had been expanded considerably to cope with causalities from the front. At it's peak had over 2,500 beds and an estimated 50,000 patients were treated at the hospital during the war.

This unique picture of World War 1 soldiers and a banner which has Power House Camp - Netley Light Infantry - (power hose probably referring to the electricity/gas supply).