Fulbourn Asylum Visiting Committee (Chair Mr Webber) met on 24 June 1918. Reported that the House Committee had meet a delegation ( Mr Turner & Ms Partridge) from the newly formed Fulbourn branch of the National Asylum Workers Union who requested recognition. It was Agreed
one of the first Asylums to recognise the union
Branch Secretary from 1936  Mr B. Baxter 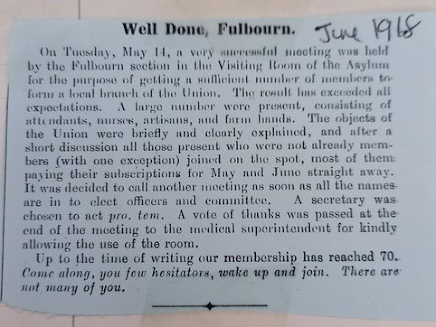 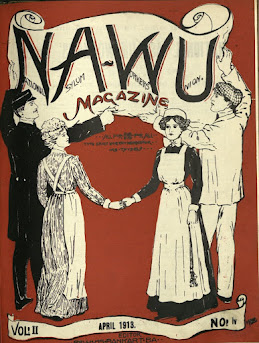 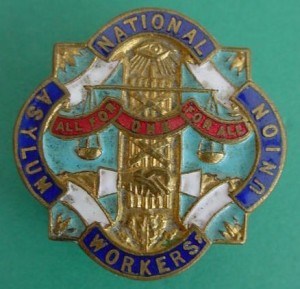 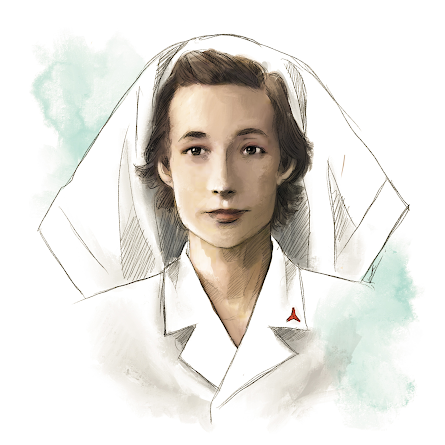 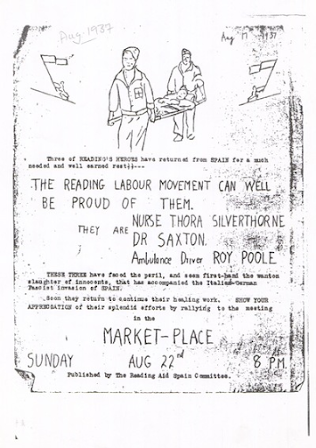 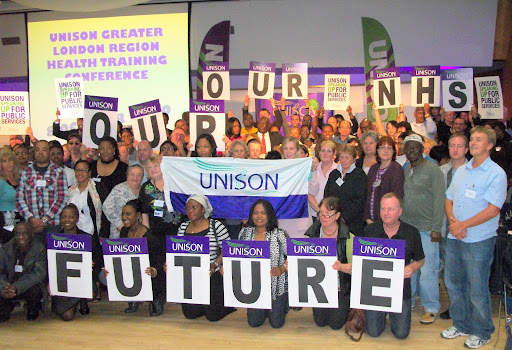 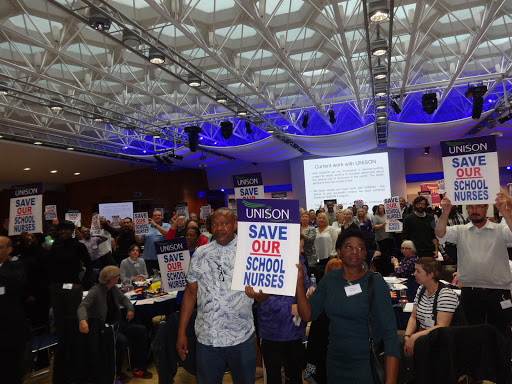 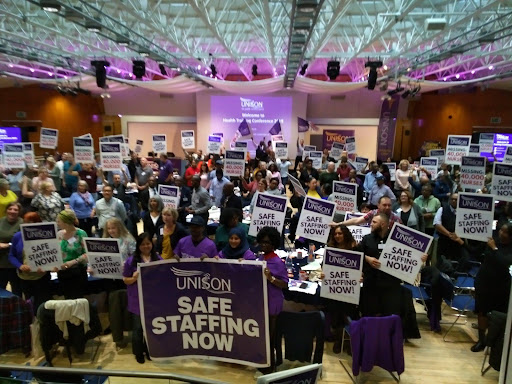 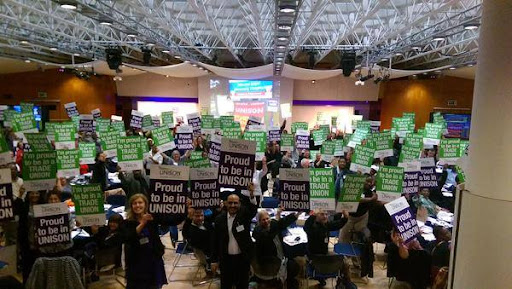 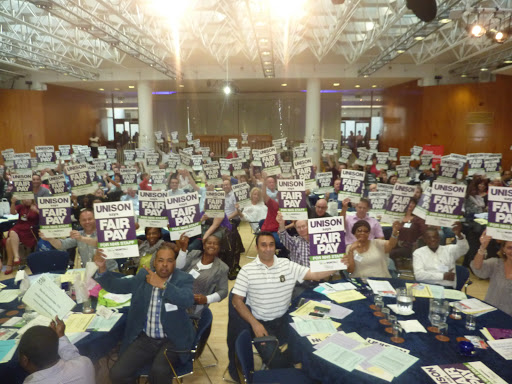 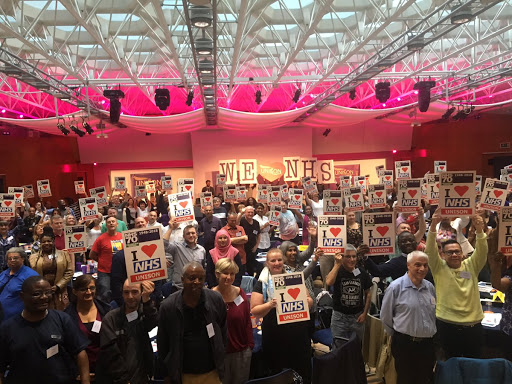 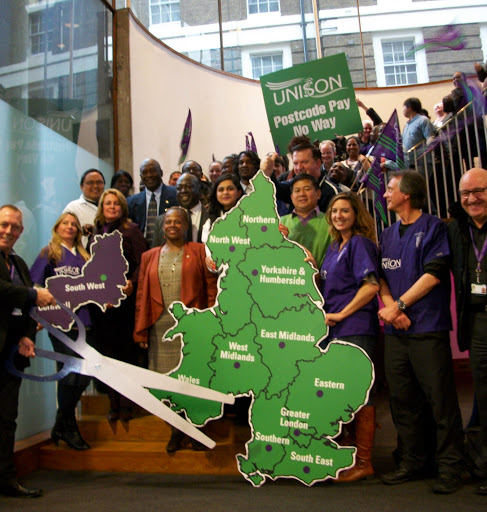 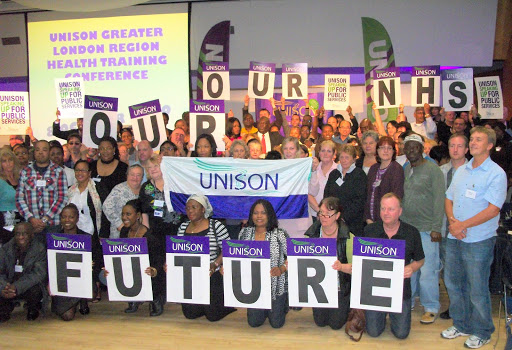 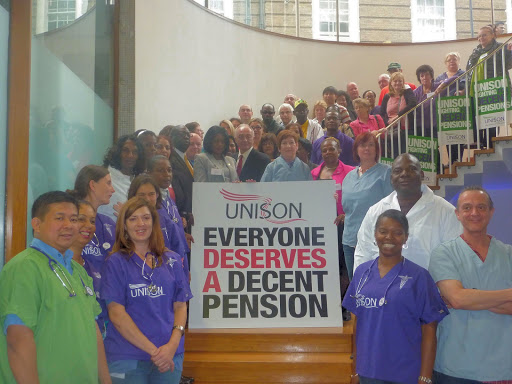 "A History of the Progress of coloured US Graduate Nurses" (1929).

National Asylum Workers Union established 1910
(Later COHSE now Unison)
Mr. G. E Hopton attended the first annual conference in Birmingham in July 1911
G.A Yates (Norfolk Asylum) NAWU National Executive Committee member 1911
December 1911 the Norfolk Asylum branch of the NAWU had 28 members (20% of Asylum staff) - so branch probably dates from 1910
A meeting of the Norfolk Asylum NAWU branch was held at the Clubroom, Thorpe Gardens Norwich, 11th February 1913 present was George Gibson Vice President of the union (later General Secretary) Norwich Councillor H.E Witard and Dr Thompson and the Hospital Matron.
Rare for Mental hospitals of the time, the relationship between Asylum workers and management was said to be harmonious at Norfolk Asylum and according to the Union report of this meeting
"proof of cordial relates that existed between the workers and the Medical staff"
Mr Hopton stated the branch was "now in a flourishing condition"

However, by August of that year things had soured, the food for staff and patients served on the 7th August was condemned bu the union as "unfit for human consumption". The quality of food for Asylum staff and patients was a national scandal due to reluctance of Visiting Committees to pay as little as possible for the care of mental patients (and staff). It was Hopton who then approached the Visiting Committee Chairman to complain taking with him as evidence his portion of the Ham. On the 20th August he was called to the Medical superintendents office and summarily dismissed for the incident and despite support from Norwich Trades Council he was not reinstated and unfortunately joined the very long list of the unions victimised members.
However despite this setback the NAWU continued its activities at Norfolk Asylum
1925 the NAWU nationally made a £25 political donation to George Edwards to aid him in the South Norfolk parliamentary by-election. The NAWU offering "wholehearted support". No doubt due to Edwards previous help in securing from the Visiting Committee an increased wages and War bonus for Asylum staff in 1919 as he was a member of the Committee.
July 1914 Norfolk Asylum NAWU delegate to national conference was Miss A.E. Samways (one of only two women delegates)
1920 Branch Secretaries
Norwich: Corporal G. A Yates RAMC - Norfolk War Hospital
Hellesden: E.A. Burden - 146 Marlboro Road Magdalene Rd
Great Yarmouth: A. Johnson - Attendant Royal Naval Hospital 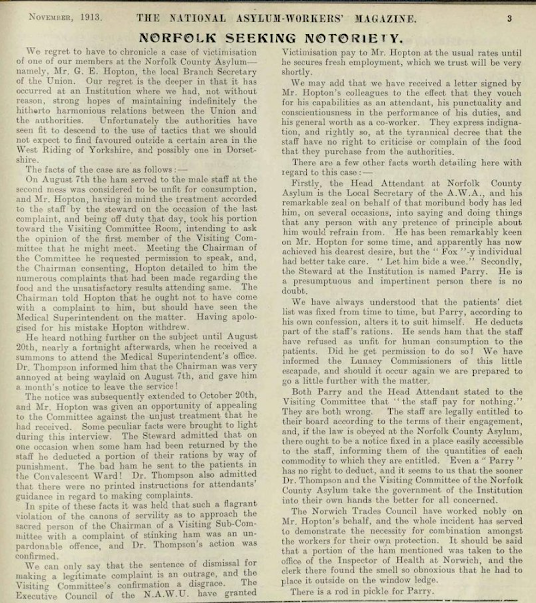 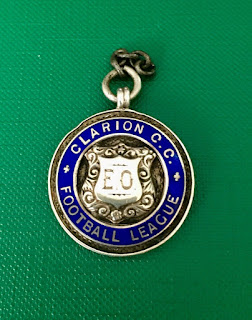