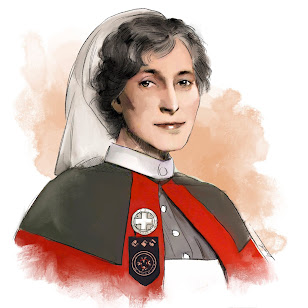 The death has occurred in April 1957 of Miss Sarah A. Claridge, R.R.C., at the age of 85. Trained at the , she was responsible for organising a supply of linguist nurses for the Allied Forces in the 1914-18 war, and held medals from various wars including the Boer War.

Having been in the forefront of the fight for State Registration, she continued to champion the cause of nurses, not only to establish and maintain their status but also to remove injustices and improve conditions.

Miss Claridge was one of the founders of the Professional Union for Trained Nurses and became its President, with Maude MacCallum as Hon. Secretary.

The Professional Union for Trained Nurses (PUTN) was registered under the Trades Union Act and was closely associated with our own Poor Law Workers Union and National Union of Asylum Workers (the two Unions which subsequently became the Hospital and Welfare Services Union and Mental Hospital and Institutional Workers Union which in turn, amalgamated to form the present Confederation of Health Service Employees (COHSE).

Miss Claridge was one of our members (NUCO) until just before the end of the last war when she retired from active nursing. We have vivid recollections of her attending our area nurses' meetings during the fight for Limitation of Hours of Duty and the introduction of the Rushcliffe recommendations. It was through the efforts and support of such as she that the General Nursing Council G.N.C. List of Trained Nurses was established.

Two letters signed by Maude MacCallum on behalf of the Professional Union of Trained Nurses appeared in the Journal of the Poor Law Workers Union (PLWTU) for March, 1921, one condemning a Governor of St. Thomas' Hospital (London) for his speech to the ' nurses expressing disapproval of nurses uniting to form a trades union, and drawing attention to the Treasurer of that hospital (acting on behalf of the College of Nursing now RCN) "thanking the trade union men for the subscriptions they had sent to help organise nurses." In this letter the Matron, Treasurer and the governor were challenged to explain why they could accept trade union money and yet hold that trade unionism for nurses was degrading and undignified.

The second letter refers to the membership figures of the , stating that membership on paper was not indicative of strength, which latter could only be ascertained by the number of up to date paying members. (One seems to hear the echo of these sentiments still).

So a great pioneer of nursing and trade unionism passes. We are proud to have been associated with Miss Claridge and to have shared her ideals.

We still need many more of her caliber today —in the words of another great woman trade union pioneer, Mary MacArthur, "Lets hold fast to the things they have won."