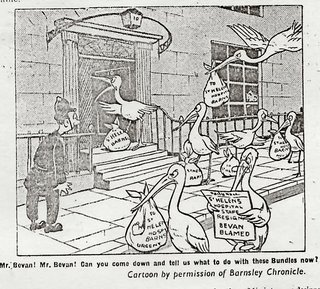 About a year ago (1947) newspaper printed a glowing tribute to Matron M.G. Burn and members of the staff at St Helen’s Hospital, , who volunteered to go into quarantine, which lasted three weeks, following an outbreak of small pox. Matron, nurses and domestics worked long hours under trying conditions forgetting self interest to serve the community, knowing that others who refused to accept quarantine would receive wages just the same.

In November, 1947, application was made to the Barnsley Authority for some tangible recognition of their service and it took them, three months to reach a decision to grant them an extra week's pay.

In refusing this, our branch 'pointed out that assistant nurses would receive less than £1, while administrative and technical staff would yet over £7

In May the COHSE branch was notified that the Authority adhered to its decision, but after hearing a deputation the following month they agreed to COHSE’s proposal that each member of the staff should receive a minimum of £5 or one weeks wages whichever was the greater.

Then the real trouble began. The Minister refused sanctions to extra loan required to implement the award.

On September 23rd branch decided to hand in notices terminating employment. By 27th September, the COHSE Regional secretary W. J Jepson had met various officers, the matter was at regional Board level and the Minister advised of the nursing staff’s decision.

On October 1st the nursing staff handed in notices (including the Matron, who was not personally affected) to terminate on October 31st. The domestic staff hand in notices on October 24th to terminate on the same date. This matter which had been dealt with in anything but a satisfactory and efficient manner by the employing authority, had now been brought speedily to hand, and by October 7th an agreement had been reached whereby the Minister authorised payment of the £5 or one week's wages, whichever was the greater, the branch thus scoring a success which at one time seemed nearly impossible.

Why was the Confederation able to persuade the authority to change their mind after two previous decisions ? Why was the Minister made to change his mind after giving an adverse decision a short time before.?

It was brought about by one means only, and that was that the Barnsley St Helen Hospital members were 100 per cent in support of the application made by the branch and were prepared to leave their employment for the sake of a principle they felt to be at stake.

That principle was that equal work and responsibility should have equal recognition. My members of the Barnsley Branch would like to convey to all members of the nursing and domestic staff at St. Helen Hospital who were not affected by this payment their sincere thanks for the splendid way in which they allied in support of the members of the Confederation, and the decision which has been achieved in Barnsley speaks volumes for the conviction, interest and general recognition of the responsibility of membership of the Confederation by our Barnsley people.