The right to wear the union badge 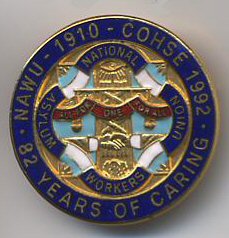 In October, 1918, there was a five days strike of the female nurses and asylum attendants at the Bodmin Asylum, , members of the National Asylum Workers Union.

The strike was the direct result of excessive hours of duty (80 hours or more), bad conditions (no pay rise, poor food and accommodation), and systematic petty tyranny introduced by the new Matron Miss Margaret Hiney.

The matron however, meet her match when Mrs Hawken a nurse and former NAWU member at Prestwich Asylum arrived and organised 62 out of 70 staff into the union.

Many staff started to war the union’s distinctive badge, but were ordered by the Matron to “take off that thing”. . The nurses were hauled before the Matron and instructed to remove the badges, as a result the “ringleaders” Hawken, Hill, Adams, Richards and Whitford were dismissed by the Medical Superintendent

On , the staff were returning to the wards when they met Dr Dudley who informed them that they could after all wear the NAWU badge, but he refused to reinstate the rebel five, The women union members stated in response “all or none” .

What brought the trouble to a head was the wearing of the Union badges on duty by some of the nurses, who were suspended and then dismissed. Other nurses walked out with them, and altogether 39 women were on strike when Mr. Shaw (acting Secretary) reached Bodmin, and this number increased to 50.

All the 50 women were dismissed by the Medical Superintendent.

The negotiations that followed ended in the complete triumph of

the . The Visiting Committee of the Asylum, after

hearing Mr. Shaw and a deputation from the strikers, passed the

" That the Visiting Committee recognise the N.A.W.U.,

and that the Asylum employees, being members of the ,

cause any injury to patients.

" That the Committee have decided solely in the interests

of the patients to reinstate all the attendants on strike."

The Matron was given a succession of periods of “sick leave” and resigned in February 1919.

The moral of the story was not lost, and activists in COHSE would often recount the fight to “wear the union badge” to Nursing Officers, especially in General hospital’s who well into the 1980’s tried to stop nurses wearing union badges while allowing them to wear Royal College of Nursing.