Joined The National Union of County Officers (NUCO) union (Later COHSE)  in 1925. He took a leading part in the early struggles to improve nursing service conditions and was part of the first public demonstration by nurses, when NUCO nurses took part in the "raid on the LCC", when leaflets were thrown into London County Council chamber to highlight LCC Nurses grievances. Patrick also took part in the famous "masked demonstration" by NUCO uniformed nurses, who march down Fleet Street on the 5th April 1938 with sandwich boards stating "we demand fair pay" and a 48 hour week.

"that the Nursing Executive of the National Union of County Officers were unanimously of opinion that nursing of the Chronic Sick should be done by fully trained nurses. If employing authorities could be persuaded to give more reasonable rates of pay, shorter working hours, and improved conditions, it would go a long -way towards removing the difficulty in obtaining the general trained nurse."

Served in France in the RAMC in WW1

Considered  "A remarkable gift of oratory"

his motto was "Let this day pass no one by"

Member of the board of Governors at the National hospital, Queen's Square

Born 15th May 1887 at Abbeyleix, Laois, Ireland to Thomas McHugh and Mary Keelly. Patrick McHugh married Mary Nevin and had 5 children.
He passed away on 29th June 1954 in Pancras, London, England. 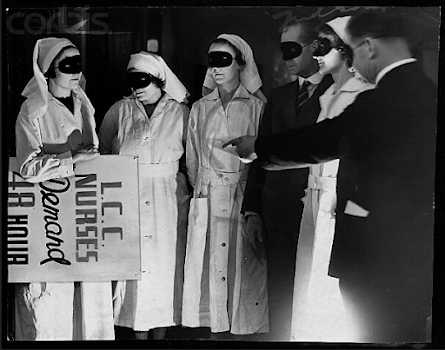