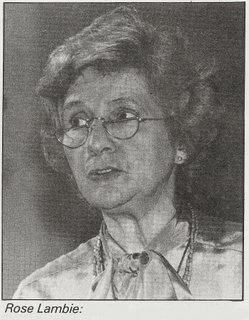 Rose Lambie was born into a Scottish mining community in around 1926, the daughter of a miner, a pedigree she was very proud to recall.

Rose commenced work at at Shotts, in 1941 as a domestic, followed by eighteen years as manageress for the hospitals shops, which supplied goods to the long stay mental patients on the wards.

Rose gained her trade union education through the National Council of Labour Colleges and sat as an employee representative on the National Insurance Local Appeals Tribunal panel in Motherwell from 1952-1962.

In 1962 Rose moved to work for three years as a senior clerk in the Dietetic office at in .

Rose Lambie was appointed to the post of COHSE women’s officer In 1965, on the retirement of Doris Westmacott .

As a national officer she took responsibility at various times for Professional & Technical and COHSE’s small but vocal Local Government members (notably in , and ) as well as other Whitley councils.

Rose was involved in COHSE first working party to examine women’s role in the union, which was established in the mid 1970’s but this was wound up in 1976 after two years, primarily because of hostility to its reports at COHSE national delegate conference “It didn’t go down well at conference” she recalled.

Another attempt was made in 1979 to reestablish an equal opportunities committee and with the support of Liz Hooper NEC member and Chair of the Committee (also Braintree Labour Councillor) much progress was made and many of the committee’s recommendations on encouraging women’s participation were adopted by the union. (COHSE was one of the few unions to have reserved NEC seats for women from the 1980’s onwards)

Rose stood unsuccessfully for the post of COHSE General Secretary in 1982 on the death of Albert Spanswick.

She was also the TUC representative on the governing Council of Hillcourt College in , the only residential college in the country for women without formal education

After retirement Rose moved back to Scotland (?) and died only a few weeks after Colm O’Kane in 2005.