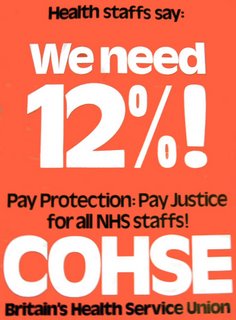 The Action Committee set up by COHSE's National Executive Committee met on and drew up a comprehensive range of recommendations for industrial action to be taken up by branches.

The two main forms to be applied within the COHSE guidelines on the protection of patient care and maintenance of emergency services are:

•ban on all non-emergency admissions;

A further list was also set out, again within COHSE's Code of Conduct and within the 1979 Joint Agreement on Emergency Services. The proposals, as well as the emergency services agreement, are listed in Head Office Circular 235/82.

Designed to cause the greatest administrative inconvenience to management and least harm to patients, they include:

•ban on the cleaning of non-clinical areas;

•reduction of output of hospital laundries;