Rev Stanley J.W. Morganas born March 1870 at London Poplar,
Described later by COHSE General Secretary Cliff Comer as “small in stature, but big in human kindness ".
His early years seem to have been spent as the Greenhithe Congregational minister in Kent, a position he held for 55 years.

He was appointed as London & Southern Regional Organiser of the newly established “Federation” between the National Asylum Worker Union and the Poor Law Workers Trade Union in 1921 on a salary of £300 a year. Working out of the Poor Law Workers (later Hospital & Welfare Services Union) office. 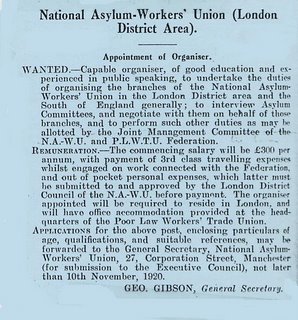 When the Federation was dissolved in November 1922 his services were maintained by the National Asylum Workers Union (later Mental Hospital & Institutional Workers Union).

In March 1922 Rev Stanley Morgan stood as the Labour candidate (with official union support) in the Parliamentary by-election at , being narrowly beaten by the Conservative candidate (2,579 votes).

He was elected to Kent County Council for the area, while living at 26 Cobham Terrace, as a Labour Party candiate.
On the eve of his retirement on 31st December 1937, a dinner held in his honour at Shaftesbury hotel on August 11th 1937, attended by Miss Wiese, Mr Blood, Mr Blackburn and Mr Southwell of the National Executive Committee.

The General Secretary George Gibson wrote of the Rev Morgan that “he had known him over a period of seventeen years during which time there has been no occasion for the slightest difference of opinion".
Mr E.R Blackburn (former President) referred to the Rev Morgan’s “grim but triumphant struggles with both the London County Council and the late Metropolitan Asylums Board. While Miss Weise praised his organizational skills amongst mental nurses.

The guests then presented Rev Stanley Morgan with a cheque for £116 by Mr F.J. Halinson Chairman of the London District of the MH&IWU union.
On retirement Rev Morgan remained a Labour, Kent County Councillor.

Stanley Morgan died on the evening of 16th at the age of 81.

“He was one of the most outstanding and striking personalities have ever met. Not everyone was able to take kindly to him because they did not take the trouble to get to know him. To know Morgan was to respect and love him as a brother”.

And Mr Cliff Comer also recalled advice Morgan gave him on being appointed a full time officer in1933 “When you come up against prejudice, as you undoubtedly will, do not stop to argue with it; leave it to rot at the roadside where it belongs, and go on your way”.

Comer also recalled Rev Stanley Morgan stating “Comer the world is mad, It will neither have Jesus Christ, nor a sensible economic system to live under”.

During the heavy air raids on the South Coast during WW2, Rev Stanley Morgan played a key role in organising Sunday church services inside the chalk cliff tunnel's used as air raid shelters .

Syd Chester: "The accordionist in the Greenhithe Tunnel " I learned that every Sunday, during the height of the Blitz, services were held in one of the chalk tunnels  at Greenhithe. The vicar was the Rev Stanley Morgan and the congregation was huge. For these people prayers were important. It was typical of that spirit of defiance shown at the time."

Reverend Stanley became Chairman of the West Hill hospital (previously known as King Edward Hospital) in 1910 and remained as Chairman for the next 25 years. He was much respected and worked tirelessly to improve the lives of the poor in Dartford.

In a day center at Barn End, , seems to have been named after him. Morgan House

And a road in Dartford was named after him

Surely, Rev Stanley Morgan deserves a fitting tribute from the people of Dartford, a people he so tirelessly served.
Posted by Michael Walker at Thursday, September 21, 2006