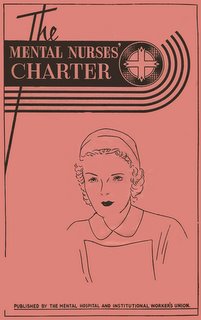 Owing to the acute shortage of nurses and the dearth of recruits to the Nursing Service, the General Secretary of the Mental Hospital and Institutional Workers' Union, as a member of the T.U.C. General Council, presented to the Trades Union Congress (1937) the Nurses' Charter, which focused public attention on the necessity of improving salaries and conditions of service in the Nursing Profession.

The Government set' up an Inter-Departmental Committee under the Chairmanship of Lord Alness,

"To inquire into the arrangements at present in operation in Scotland with regard to the recruitment and terms and conditions of service of persons engaged in nursing the sick, and to report whether-any changes in these arrangements, or other measures, are expedient for the purpose of maintaining an adequate service, both for institutional and for domiciliary nursing."

This Committee issued a report to the Department of Health for on , Many hospital authorities failed to give effect to the recommendations of this Committee and the shortage of nurses became more acute.

In October, 1941, the Right Hon. Thomas Johnston, M.P., Secretary of State for , decided to set up a Nurses' Salaries Committee in under the Chairmanship of Professor T. M. Taylor :

"To draw up agreed scales of salaries and emoluments for State-registered nurses employed in in hospitals, including Mental Hospitals."

The salaries and conditions of service agreed by this Sub-Committee were accepted as the terms of employment under the Mental Nurses (Employment and Offences) Order (Scotland), 1943, on the understanding that another Sub-Committee of the Scottish Nurses' Salaries Committee would be set up to deal with many aspects of terms and conditions of service which had not been previously dealt with.

The Secretary of State for decided that a new Sub-Committee
should be set up
"To draw up agreed scales of salaries and conditions of service of nurses in Mental Hospitals and Mental Deficiency Institutions in the light of the recommendations made by the Taylor Committee."

Throughout the proceedings of the Sub-Committee the following Union representatives attended meetings :—

This publication is not a full report of the Sub-Committee's decisions, although the main features of the recommendations are given in detail for the guidance of all Mental Nurses in .