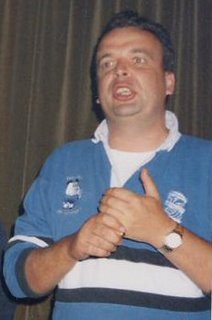 He was a keen advocate of progressive policies with regard to the mentally handicapped. He soon became involved in the local COHSE branch becoming its Assistant Branch Secretary and publicity officer.

Pete, along with his close friend Andy Stackhouse organised a very high profile campaign regarding staffing levels at the hospital, which culminated in a huge vote of no confidence in the hospitals senior management.

Pete Marshall was appointed COHSE regional officer for North Thames & Oxford region of COHSE in May 1984, securing a high level of popularity amongst the COHSE activists on his patch.

He soon secured a high profile in the media, around campaign such as Brent anti cuts campaign. Neasden hospital occupation and the 1988 nurses dispute (the later securing not only a significant pay rise for nurses but also a massive increase in London Weighting). Pete helped establish the London Co-ordinating commitee of COHSE and served for many years as London Health Emergency treasurer.

In the mid 1980's, Pete along with Bob Abberley were key in pushing through a mayor review of COHSE’s policies with regard to the Mentally Handicapped services (Learning difficulties). This led the union into having a progressive view with regard to the closure of the old large Victorian institutions. Without this progressive view COHSE would not only have lost new professionals entering this field, but more importantly could have seriously undermined any move to the community facilities.

Pete was a committed anti racists and fascist and was involved the infamous “Battle of ” against the BNP at Waterloo station.

Pete was elected to the Executive of the Greater London Labour Party and was a close associate of Jim Fitzpatrick (later MP for Bow & Poplar).

In June 1990 Pete was appointed Regional Secretary for the new COHSE London region, but on appointment stated in typical style that his best job was “renting deck chairs out on Bourenmouth beach”.

After the creation of UNISON in 1993, Pete struggled with the new channels of accountability, famously denouncing the wrong right winger in Labour Briefing earning him a famous but hilarious rebuke from Rodney Bickerstaffe General Secretary.