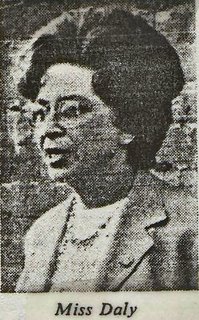 as a COHSE organiser in 1950 with responsiblity for recruitment. As part of this brief she was involved in a major campaign to recruit staff into COHSE in the Isle of Man.

She was well respected by COHSE ambulance members in in their campaign for a “nationalised” NHS ambulance service.

Kathleen Daly stood for the post of COHSE General Secretary in 1967, However, a year later it was reported to COHSE West Metropolitan Region that Miss Daly was ill and unlikely to return to work.