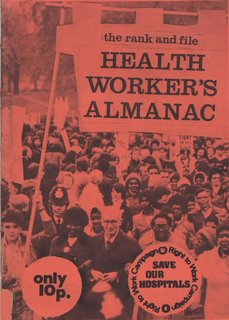 AGAINST ALL CUTS - DEFEND AND IMPROVE THE NHS

No cuts in staff at any level

No cover of unfilled vacancies

No jobs lost : for all trained Hospital Workers

For the improvement of our buildings, facilities and equipment.

NHS staff to replace all voluntary workers , agency workers and outside contractors.

All hospital workers fighting the cuts should campaign in the local TU movement for active support.

Against all loss of earnings through cuts in overtime and bonus levels; For a decent living wage for all Hospital Workers.

Against all forms of pay restraint.

For a 35 hour week; without loss of pay, To force more jobs.

Shop Stewards regularly elected for every department at departmental meetings

No participation in Joint Consultative Committees: for the building of strong Joint Shop Stewards Committees at Hospital, district and area level.

Annual national conferences to be the supreme policy making body

Full-time union officials to be elected annually by the members, on the same pay as the members, and recallable by their members at any time.

Against all racial discrimination

For the automatic renewal of work permits

For the abolition of private practice inside and outside the NHS

Hospital Worker was primarily a publication of the Socialist Workers Party established in 1973 at conference in Birmingham. In 1975 it dissolved national editions into regionaal broadsheets, but a new national bulliten was re-established in October 1976 which survived until about 1982

By the early 1980’s, the SWP’s increasing sectarianism and famous “down turn period” forced it’s closure.