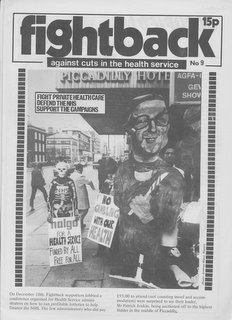 As you may know, Fightback is a national campaign which was set up in 1978 by several major anti-cuts campaigns. Our aim is to support and co-ordinate any campaign or trade union action taken against the cuts in the National Health Service and fight for better health for all. Since then we have been involved in most of the hospital work-ins and other anti-cuts campaigns. We are a completely independent organisation made up of affiliated bodies, mainly trade union branches (health, public sector and industrial) and Trades Councils and Cuts Campaigns i'rom all over the country. We produce regular Publications such as our quarterly bulletin and Action Sheets on specific topics. However, in recent months it has become clear that cutbacks in the NHS are directly linked to a massive restructuring of health care services. And although most people are painfully aware of the current underfunding of the NHS, they are less aware of the direct links between this and the rapid growth in private medicine. For this reason, Fightback has decided to throw its resources during the coming months into a major campaign against private medicine and the decline of the NHS.

Is private medicine that important? We think it is. The stated aim of the present Health Minister, Dr Gerard Vaughan, is that 25% of health services should be provided by the private sector. The Financial Times (7.1.1981) calculated that inSeptember 1980, 3.4' million people were covered by private health insurance schemes (this represented a growth of 25% in one year). Other aspects are the abolition of the Health Services Board which has helped to make private hospital building a boom industry; new doctors' contracts which allow more time for private patients; the proposals for a new system of National Insurance coupled with charity schemes and lotteries to raise funds for hospitals and equipment by which people are asked to pay twice for services. But perhaps the most worrying thing is the result of a National Opinion Poll survey on trade unionists' attitudes to private health insurance. This showed that in February 1980, out of a survey of 2,000 trade unionists, 66% said they were in favour of their union accepting a deal on pay which included private health insurance.

Meanwhile, in the NHS there are ever increasing waiting lists, hospital and ward closures, staff shortages and low pay. It is no surprise that many people mistakenly see private medicine and private health insurance as a solution to their own problems. What we see is a dangerous slide towards market-place, profit-motivated health for those that can pay, and an impoverished, charity-backed NHS for those that can't, including the elderly, the chronic sick, mentally ill and physically disabled. We believe this will totally undermine the basis of the NHS as it was set up in 1948.

Our campaign is intended to back up the trade unions' commitment to oppose the existence of private medicine. We are fighting for an efficient, expanded National Health Service, freely available to all at time of need, paid for by general contributions and democratically controlled by those who work in and use it.

To launch the campaign, Fightback is planning to hold a conference in the summer of 1981, and we are producing a pamphlet to be of direct use to trade unionists and the Labour movement in the workplace and in the community. Our last pamphlet, "Keeping Hospitals Open", sold 8,000 copies and was widely circulated especially amongst public sector trade unions and campaigns. We intend this pamphlet to reach an even bigger audience and in particular unions whose members may feel persuaded to join workplace health insurance schemes. We would like to print 10,000 copies at first. This will require a big initial outlay, but the reduced cost for printing this number will allow us to keep the price of the pamphlet low. We hope that this will build up interest and support for the summer conference. In both pamphlet and conference, our emphasis will be on providing the basic facts and arguments, with practical examples from different areas and suggestions for ways of organising effectively.

We are writing to you to ask for your support in this campaign.

WHAT WE ARE ASKING FOR

2. SPONSORSHIP. We would like to add your name to our list of sponsors for our pamphlet and/or conference.

3. ADVANCED ORDERS OF THE PAMPHLET (at a reduced rate for sponsoring bodies).

4. For you to CIRCULATE INFORMATION about the Private Medicine campaign amongst your members. (Further copies of this letter available from Fightback.) We will be happy to inform you of all planning meetings for the conference and hope you will be able to send a delegate. We will also be pleased to provide you with any further details or information you require on Fightback and on our proposals. We enclose a reply slip. .

We look forward to your response.