"Insult" to Duke of York.

January 1927 National Asylum Workers Union Journal
Gateshead Town Council on January 5th 1927 refused to allow the Communist Party to hold meetings in the Town Hall. During the proceedings there was a stormy scene arising out of an incident at the Corporation's mental asylum at Stannington, where, it was alleged, a "red flag" was flown while the Duke of York was at the neighbouring hostel of the Newcastle Poor Children's Holiday Association.

Councillor White said the statement was not true, and refused to sit down when ordered. After a good deal of uproar the Mayor explained that the red flag was exhibited from a window of a building on the asylum estate. When an employee was called before the committee he denied showing the flag and said it was flown by his daughter.

The Mayor said the committee did not believe the statement, and declared that the red flag was flown " to insult the Duke of York, the Lord Mayor of Newcastle, the Sheriff, and the Union Jack." He had never known such impudence.

It was agreed that the committee should further investigate the matter.

NOTE
Red Flags were regular flown by protesters from Workhouses in the 1930’s as part of the national unemployed Workers Movement campaign
Red Flags were flown over hospitals in Glasgow on July 5th 1948 when the NHS came into being.

St Pancras Council Labour leader John Lawrence, fulfilled a Labour commitment to fly the red flag from the Town Hall on May Day, 1958. A policy attacked by the right wing national press. The St Pancras Chronicle commented, ’will long be remembered by the 140,000 residents of St Pancras as one of the most exciting days in the borough’s history. For the Leftists, the raising of the Red Flag over the Town Hall in Euston Road, NW1, was a proud achievement.

Many Labour Council's in the 1980s, such as Hammersmith, Islington, Manchester and Sheffield regularly flew the red flag

Red Flags flown over Monaghan and Letterkenny Hospital “Soviets” in Ireland
Famously the Red Army flew the Red Flag over the Richstag, when it was captured from the Nazi's at the end of WW2 in Europe. 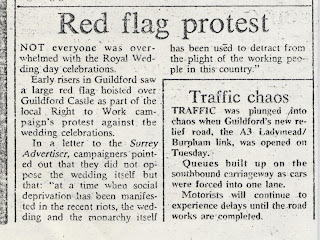 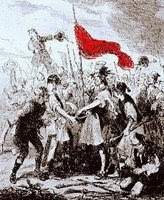 The red flags of became a potent relic following the execution of early trade unionist British sailors mutinied near the mouth of the River Thames in 1797 and hoisted a red flag on several ships.

Two red flags flown by marchers during the Merthyr Dic Penderyn (Richard Lewis) in August 1831 despite a public campaign to pardon him.

Rising of 1831 in South Wales were soaked in calf's blood.
Posted by Michael Walker at Tuesday, August 06, 2013