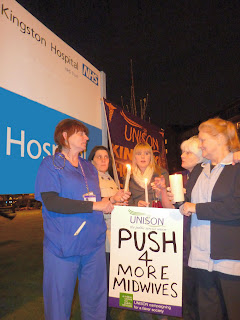 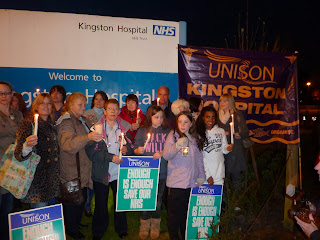 UNISON midwives and nurses at Kingston Hospital, Surrey held a candlelight vigil tonight (30th March 2011) to protest at the shortage of midwives at the hospital and to oppose the loss of 500 nursing and medical posts at the hospital.

" UNISON is campaigning against the national shortage of midwives. We will be campaigning with local mothers to ensure Kingston hospital gets the resources it needs to continue a high quality service to mothers"

"The national shortage of Nurses and Midwives is being exacerbated by increased attendance at A&E and higher birth rates than projected, The Government needs to act urgently to avoid a crisis"

Nurses and midwives took to the streets outside Kingston Hospital in a candlelight vigil against cuts.

The hospital has announced money-saving plans to remove 486 posts over the next five years, including 214 nurses and midwives.

Helen Martin, a nurse at the hospital for more than 20 years and wife of Health Emergency campaigner Geoff Martin, said: "The fight for frontline, life-or-death services is well and truly on and we have no intention of letting the opportunistic politicians, who used our hospital for their own purposes, off the hook now our jobs are on the line."

After the vigil, on Wednesday night, public service union Unison has issued its own response to Kingston Hospital's draft business plan arguing that the approach to the cuts is flawed.

Staff at Kingston Hospital were joined by singer Billy Bragg when they joined last Saturday’s march through London against coalition cuts.