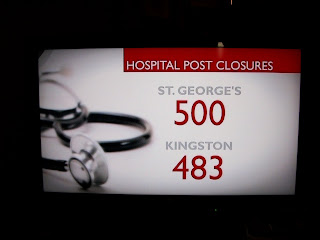 News that 500 staff, including nurses and consultants at St George’s Healthcare NHS Trust in Tooting, are to lose their jobs, is a terrible shock to staff and patients, said UNISON, the UK’s largest union today.

The Government squeeze on NHS finances and demands for £20bn in so-called ‘efficiency savings’, is forcing the Trust into making serious cuts in order to save £50m.

The cuts will lead to at least three wards closing with the loss of roughly 100 beds. The Trust is also capping the number of births at the hospital to 5,000 a year, e, leading to a significant gap in local maternity services, and forcing women to travel long distances to give birth.

Dave Prentis, General Secretary of UNISON, said: “Cutting 500 jobs and closing at least three wards is a devastating blow for staff and patients at St George’s . The shock waves will be felt in hospitals across London and beyond. “This announcement is more proof that the NHS is not safe in Cameron and Lansley’s hands and is reminiscent of Thatcher’s devastating reforms during the 80s and 90s.

Only 2 weeks ago, Barts and the Royal London ‚ announced 630 job losses, including 250 nurses and 100 beds cut. Sadly we are going to hear a steady feed of these cuts with the loss of valuable staff, beds and services in communities right across the country. “These job losses are collateral damage to a Government intent on pushing through the Health and Social Care Bill.

The reality is it is wrecking NHS workers’ lives and careers, and endangering the patients they treat.” Nurse Jane Pilgrim, UNISON Nursing Convenor at St George’s Hospital said: “This is a sad day for staff at St George’s .

We were told by the Government that there would be no cuts in frontline posts but in reality the NHS is witnessing swingeing cuts to frontline services every day”. The Trust is one of the largest healthcare providers in south west London . St George’s Hospital in Tooting is one of the country’s principal teaching hospitals.

The union is warning that the loss of so many jobs will have serious consequences not only on the local community and London , but on patients across the south east. The Trust provides treatment for specialities such as bone marrow transplants, complex pelvic trauma and HIV care across a wide geographical area.

UNISON will be seeking further meetings with the Trust to try to minimise the job losses and protect patients.

"In a week when the bankers are set to receive huge pay rises and multi million pound bonuses, we are going to witness the spectre at St George's of dedicated nurses, doctors and health staff losing their jobs. How can that be fair or right?"

"We were told by the Government that there would be no cuts in frontline posts but in reality the NHS is witnessing swingeing cuts to frontline services every day".

"Capping the number of births at St George's to just 5,000 a year will mean thousands of local women will no-longer be able to have their babies at St George's, denying them the back up and confidence they know comes from having a baby at an internationally renowned teaching hospital.

"UNISON will be working with St George's Hospital management to mitigate the impact of these cuts on patients and staff. Mr Lansley needs to urgently recognise the damage he is causing to the NHS with these unprecedented levels of cuts".

"We urge all local Member's of Parliament, of all political persuasion’s to intercede and urge Andrew Lansley the Conservative Secretary of State for Health to halt these disastrous cuts at St George's before patient care suffers.