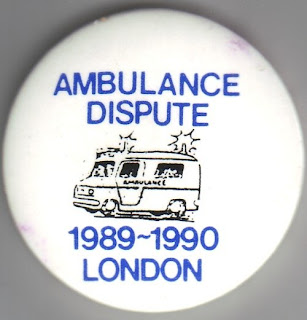 Ambulance workers enjoyed unprecedented levels of public support during the six-month dispute as opinion polls found more than four out of five people consistently backed the unions.
Successive polls for the Daily Telegraph found even a majority of Conservative voters felt Health Secretary Kenneth Clarke should come up with more cash as he took the brunt of the blame for the disruption to patient services.
Electors said they would even be prepared to pay a little more income tax to fund a deal, while other health service staff, including nurses, disclosed that they would not demand an equal pay rise if ambulance crews and control room staff were awarded more than the going rate.
Such sympathy was evident daily by the millions of pounds that filled the buckets
thrust forward by the ubiquitous, fluorescent-jacketed ambulance staff that became as much a part of shopping centres as Boots and McDonald's.
TUC General Secretary Norman Willis told how would-be queue-jumpers were ordered to the back of the line while he waited patiently to add his name (no doubt again) to the record-breaking petition. 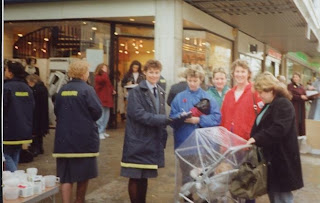 All good stuff for the unions but, of course, it was never ordained to be so, as previous disputes involving NHS workers in the 1970s and early 1980s demonstrated.
This time round the five unions involved COHSE, NUPE, TGWU, NALGO and GMB — paved the way for their own success by breaking new ground with a slick public relations campaign that went further than any previously used by a workforce during a dispute.
The initiative was seized with a strategy that had its effect on the wider world of statements and actions worked out, instead of merely addressing the troops, and realised the importance of newspaper, radio and TV in getting a message across.
Once a groundswell of public opinion had been generated, every opportunity was taken to portray the crews and not the Government as the patient's friend and to hammer home a simple message.
Initiatives were repeatedly launched to make the running rather than merely provide reaction which, by staying one step ahead, often wrong-footed the Government and kept the Departmental of Health on the defensive for much of the time.
Frequent press conferences, a national demonstration, the petition, a quarter-hour of action and even a hunger strike kept the dispute in the public eye when it might have been forgotten.
The unity displayed by the five unions and the absence of what for the NHS used to be traditional in-fighting, rivalry and factionalism allowed a united front to be displayed which forced journalists to look towards the Government for splits and divisions.
In that vein, tasks were allocated to avoid repetition and confusion. NUPE's Roger Poole, the chief negotiator, became the public voice and was constantly in the media, modelling a new hair cut and a businessman's suit to look as well as sound the part. 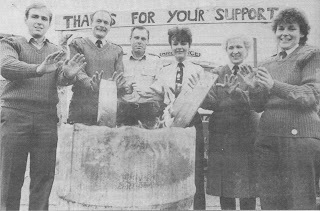 Meanwhile, COHSE's Bob Abberley beavered away behind the scenes in Parliament to put crucial political pressure on Ministers which was as important.
Several years ago everyone would have been clamouring to appear on TV as they jockeyed for status and, no doubt, future members. Now a trio of those involved, COHSE, NUPE and NALGO, could end up merging — partly as a result of the demonstration that they can work together.
The two immediate goals of the dispute
— a substantial pay rise and new pay machinery — were constantly pressed home in simple, relevant terms by the unions, while other issues such as local bargaining and privatisation which the public would either not understand or have less sympathy with were left in the background.
Opinion polls showed that the ambulance worker-supporting public did not know what the Government's offer was or how the pay mechanism demanded would work. But what they did believe was that crews were worth more, and the new system would just about rule out future industrial action. 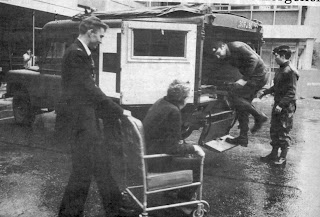 The employers, on the other hand, varied their official spokesman between Kenneth Clarke, NHS chief executive Duncan Nichol, and David Rennie, who chairs the employers' side on the Whitley Council negotiating body, with the result that apparent differences of opinion were interpreted as splits.
In many respects the unions' public relations campaign set a model for others to follow and established standards by which they will be judged in the future.
The strategy was not entirely new, although the effective use of the latest communications technology which meant and Abberley could always be reached for an instant quote did break new ground.
After all. National of Railwaymen General Secretary Jimmy Knapp
projected himself very successfully last summer as the passengers' friend in the confrontation with BR over pay and bargaining rights by hammering home a simple message and making it relevant to the wider travelling public rather than limiting the dispute to the interests of his members.
And the Confederation of Shipbuilding and Engineering Unions hired a PR firm with close links to the labour movement to get their message across in the shorter working week campaign.
But the five national negotiators, dubbed the "famous five" for the way they often appeared together and even started wearing matching overcoats, took PR a significant step further.
The dispute was right for the tactics. Ambulance workers had a reasonable it not a good case and have a high public profile because of the life-and-death nature of the job. The timing of the dispute was also right in that the polls had already started to move against the Government, which the unions were able to capitalise on.
Flashing blue lights and 999 sirens provided excellent TV pictures in particular and the service has something of a glamorous image for outsiders.
Further, crews used to dealing with the public in high-pressure situations adapted
well to the glare of TV lights and, judging by the number of local stunts launched,
actually liked the media attention.
Running a similar campaign on behalf of other low-paid groups such as ancillary workers — however deserving — will not be as easy. But the lessons are there and should be learnt.
Splits and in-fighting in the union camp would have been reported. Violent picketing and clashes with the police would have made attention-grabbing TV pictures. Disputes will be covered in the form they occur. It's up to the unions how they want to run their campaigns, but if it's public opinion they want on their side, they could do worse than copy the ambulance workers.
Kevin Maguire is the Daily Telegraph labour correspondent.
He writes here in a personal capacity.
COHSE Journal May 1990
NOTES
In my experience, this was undoubtedly one of the best led strikes in the NHS, the ability to use the media and the discipline of local Ambulance union reps and members was key to winning and maintaining public support.
The hub of the dispute was undoubtedly and in particular most notably Park Royal, Feltham, Twickenham and Hillingdon ambulance stations.
Crews in , Merseyside and were also very strong
The tactic of slowly increasing pressure on employer (overtime bans, emergencies only etc) forced the management in frustration to effectively “lock out” ambulance staff by refusing to send any calls to these stations and bring in the Army.
The Crews responded by occupying the ambulance stations as they did at Hillingdon, the management being forced to issue injunctions, but with little effect.
Elsewhere, in the country, Ambulance management in many areas did not follow ’s tactics and the crews remained at work, allowing them to secure even more support and money for those “locked out”.
Nine weeks into the dispute the Health Service Journal reported that an estimated 27 out of 44 ambulance services were operating a 999 only service.
Kenneth Clarke’s remarks that ambulance workers were little more than “professional drivers” totally incensed the crews.
On January l3th 1990 75,000 attended a TUC national demonstration in support of the ambulance workers and on 30th January a day of solidarity, when South London bus drivers came out on strike
While the dispute was not a total success, the public was confident the unions had rightly won and gave a big fillip of confidence to NHS trade unionists
Roger Poole was an excellent public speaker and with a CP background understood the need to keep both the public and the members on side. Bob Abberley became know as “ bag carrier” and Jeanette Roe COHSE Regional Officer did Stirling work with Pete Marshall COHSE Regional Secretary in galvanising COHSE members in .
As the ambulance service had been initially part of Local Government( London County Council) most staff in were members of NUPE 70-80%. However COHSE had from 1964 built up a small but significant membership based around the leadership of Bill Dunn at Hanwell, (The other key COHSE branch being at Park Royal)
The Ambulance dispute started October 1989 – March 1990 and lasted six months
The Great Ambulance petition secured 4.5 million signatures 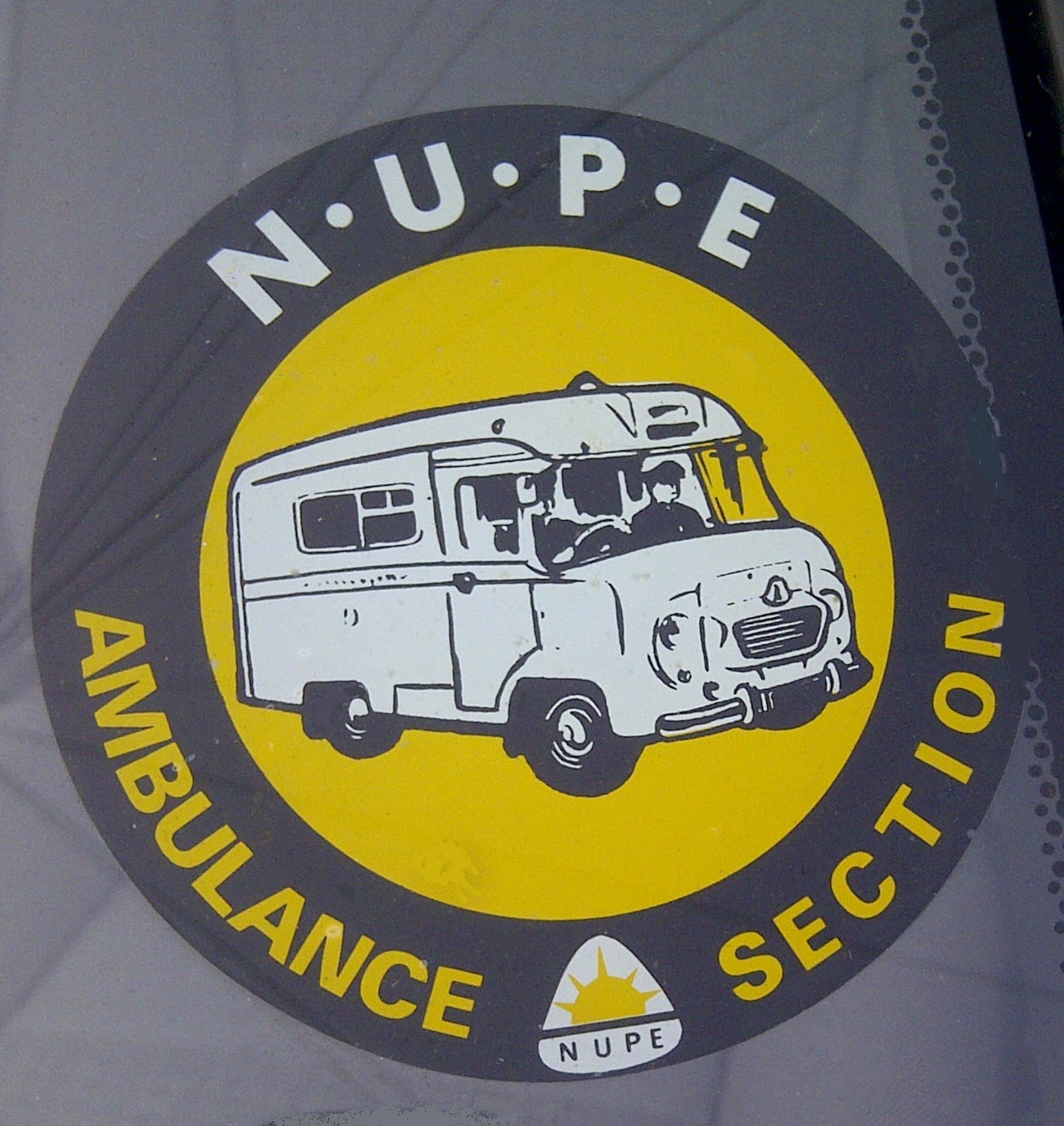