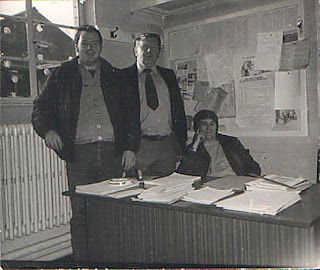 A Life of Celebration

Gary Fabian pays tribute to Frank cave, Vice President of the National Union of Miners (NUM) and friend of , who died on January 8th 2002 after long illness. (Frank Cave centre).

FRANK died at the young age of 59. Frank's life is a "life of celebration". As a young man he played cricket for many others of his generation, he left school at 15and stated work at Brodsworth colliery. The pit employed 3,000 men, tragically this is more than employed in the whole of the coal field today.

Like all members of the NUM, Frank began his life on the coal face. A young miner full of the desire to create change, both in the mining industry and in society.

Change for his members, change for workers nationally and internationally. Frank played a prominent role during the 1984/85 miners strike.

He became the Yorkshire President in 1982 and was subsequently elected as assistant General Secretary in 1990. Frank also served on the area NUM Executive Committee and was their chair until his untimely death. Whilst NUM members will remember Frank for his contribution to the union, many other trade unionists will remember his international commitment.

Frank was truly an international socialist. Indeed it was on the international platform that I first met Frank. In 1996 the first world conference for Cuban Solidarity

The delegation was led by Ken Gill Chair of Cuba Solidarity Campaign (CSC) and supported by many trade unionists, political activists and an MEP. To say that the trip to was ill-fated is an understatement. The dozen or so intrepid travellers met at Heathrow airport and boarded the plane, only to touch down in and find that the plane was not air-worthy.

Following a confrontation with the airline our party were finally given seats of a plane to . The pretext was that a second plane would take us on to

. Not the case. We arrived at to find the plane had left without us and to all intents and purpose we were stranded in for the next few days.

As good trade unionists and socialists we demanded accommodation in a manner and style to which we were accustomed. The Hilton Hotel no less ! The airline company acceded accustomed to our request and we settled in for the night.

The next morning our thoughts turned to how exactly, could we get to in time for the conference? Insider information told us that the board of directors of the airline in question were meeting at the hotel on that day. The plan was clear, we would make representations to the meeting.

Skilfully working our way to the meeting room we burst in the door and Frank shouted at the top of his voice:" We demand a plane to and we won't leave the room until we get it!" Finally our party did reach we attended the World Conference and Frank presented Fidel Castro with a crystal clock from the NUM.

Frank's determination to get to was only matched by his determination to support the Cuban people. Frank clearly believed that the political system in was far superior to the one in this country and stated that to all who would listen and some who wouldn't wouldn't.