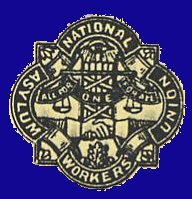 Is There Any Demand for a Union Badge ?

For two years or so the question of a union badge has graced the agendas of successive Executive Council meetings and Annual conferences; and time after time the subject has been left “to lie on the table”, which in other words means that it is not considered to be of such pressing importance that time need be wasted in discussing it.

Now there must of necessity, be either demand for a badge, or no demand for one, and in the latter case the matter might just as well be dropped straight away and have done with it.

On the other hand, judging by the correspondence received at headquarters from time to time, there does appear to be a a genuine demand from many quarters. And it has been suggested to us that if the does not soon adopt an official badge the London County Council section of the will obtain one of their own!

This, of course, would be an undesirable (and we might add, unauthorised) proceeding, and it would be a ridiculous state of affair, for different " Circles" of the to have different kinds of badges. We must have unity on the badges' question as on any other.

We believe we are right in stating that as a Union without a badge we are somewhat unique in the trade union world, and our own opinion is that thew N.A.W.U (National Asylum Workers Union) will eventually find, as apparently all other Trade Unions have found, that a distinctive emblem of the Society is not only a valuable organising agent, but has a great moral effect upon the loyalty of existing (but " shaky ") members.

The accompanying draft badge (specially designed in colour, for us by Messrs Fattorini, of , who also kindly supplied the block) is reproduced in order

that members may have an opportunity of judging for themselves whether an artistic badge would be invaluable asset to the NAWU Union or a wasteful extravagance.

The badge would, of course, be enameled-faced in beautiful colours, and could be made in the form of pendants or studs for men, and brooches for the ladies The design reproduced on this page is the actual site of the suggested badge.

The few objections we have heard to the badge idea are herewith disposed of;—

2: Members who lapsed, having paid for the badges could still wear them, even though no longer members of the union

Answer: They could , but they wouldn’t if they were pilloried in the Magazine for wearing a union badge when no longer members, In this case, of course, the local Branches should be empowered to buy back the badges from lapsed members.

Are there any other objections ?

We shall be glad to hear from ALL Branches on the subject, favorably or otherwise.