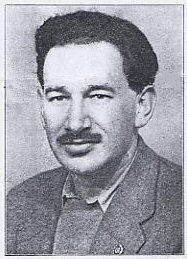 Taylor was born in 1921 in New Brighton, Liverpool to Orthodox Jewish parents. His grandfather had fled the pogroms of Eastern Europe to settle in Merseyside. The families name changing from Zadesky to Taylor (Cyril’s father occupation)

In his Youth Cyril was active in the Jewish (Zionist) Youth Movement, attending Zionist habonim camps but soon developed into a socialist. As a sixth former at Wallasey Grammar school he heard a talk about the Spanish civil war and this event had a major impact on his political beliefs. After school he trained as a medical student at Liverpool University, graduating in 1943 and began work at Alder Hey 1946-1948 later becoming a R. A.M.A.C. Major Commander at the British Hospital Khartoum then returning to Walton hospital.

He was part of a Socialist Medical Association delegation in 1946 that meet Bevan to urge him not to back down to the BMA opposition to the creation of a National Health Service. Taylor was a pioneer of Health Centres and remained active in the Socialist Medical (Health) Association all his life becoming its President.

After the war he was called up for national service and became a major in the Army which included a period in charge of the British hospital in Khartoum. However on his return he faced victimization in several jobs, including being sacked in 1949 as the Medical officer of the Liverpool Shipping Federation because he was a Communist. So in 1950 he set up his own medical practice at Sefton Drive.

He became active in the Confederation of Health Service Employees (COHSE) founding the Walton Hospital branch of COHSE and becoming it's branch secretary, active in the COHSE Medical Guild. COHSE repaid him by censuring him for referring to his COHSE membership in a Communist Party Liverpool city election address. His house become an open house for Chilean political refugees after the 1973 coup.
The costumes, props and scenery of Liverpool Unity theatre were stored in the house and the garden used for rehearsals. Norah Rushton was a close friend

Cyril left the Communist Party over Hungary invasion and was elected a Labour Councillor for Granby ward from 1965 -1980 and Chair of social services. In 1977 he moved into the purposes built Princes Park health centre in Toxteth, Liverpool. He would joke “I’m Cyril from the Wirral”. Cyril Taylor died in 2000 aged 79