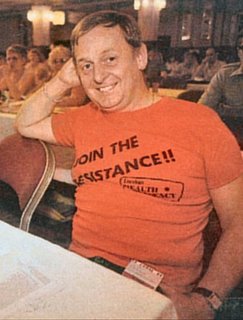 1987 COHSE Conference set its face firmly against discrimination against gay men and lesbians with a call to support equal opportunities at work and in the trade union and Labour movement.

Michael Walker moved the resolution calling on COHSE “to ensure that all our members could live without fear of persecution”. Roy Oliver, ( and District branch) (right)told delegates: 'Discrimination exists in all walks of life. For the gay community it condemns us to hide, to 'As one of our great writers put it, "The love that dare not speak its name".'Gay people, he said, were experiencing a disease 'that takes then" loved ones from them, sometimes

after 15 or 20 years', and yet The Sun newspaper was holding 'We need positive images to change attitudes,' he said. 'We need education.' right. We ask to be treated as people with feelings who care and who love one another. We ask to be treated as Tony Ventham, (Park Royal Ambulance branch)supporting resolution 90. said: 'The question of gay rights and the question of people being split from each other in the workplace.

But Alan Couch, Cefn Coed, spoke against the resolution. 'The best interests of society in this matter would be best served by a further Royal Commission,'
he suggested.

COHSE National Officer Judith Carter speaking for the NEC, called for support for the resolution.

'The whole question of AIDS has brought this issue sharply into focus,' she said. 'Gays and lesbians face discrimination in terms of their ability to obtain and

hold jobs and houses and there have been many instances of them being deprived of the custody of their children.

The resolution was carried.

That this Conference opposes all discrimination against Lesbian and gay men and recognises that this discrimination is institutionalised in society as it is in the National Health Service.

Conference therefore welcomes and reaffirms COHSE's support for the lesbian and gay resolutions passed at the 1985 and1986 TUC and Labour Party Conferences and calls on the National Executive Committee to:

(i) oppose all discrimination against lesbian and gay men in the Health Service and in the trade union and Labour movement;

(ii) support the Labour councils' introduction of comprehensive equal opportunities policies including 'positive images' of lesbian and gay men such as in Ealing and Haringey Council;

(iv) campaign for all District Health Authorities to include in their equal opportunities policy opposition to discrimination against lesbian and gay men;

(v) support the awareness of lesbian and gay issues within COHSE and the trade union and Labour movement;

(vi) affiliate to the Labour Campaign for Lesbian and Gay Rights and support the
LCLGR Charter.