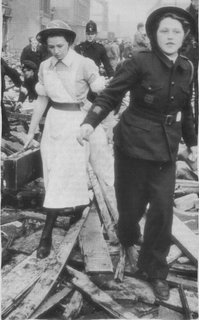 Sixty old women, all bedridden chronic patients, were in bed in the ward of a hospital last night when a high explosive bomb crashed through the building and exploded on the ground floor.The bomb fell before the alert was sounded.

Nurses, doctors, students and porters rushed to the spot and found one end of
the ward a, heap of smoking rubble with beds and patients buried beneath it.

Digging Into the debris with their bare hands, they soon reached some of the women, and within half an hour had cleared the block.

Three of the patients and a sister, however, had been killed by the explosion.

Four bombs fell on the hospital premises; three burst in the grounds, doing no damage.

It was the fourth which hit the chronic patients" block, a 'three-storied building, and plunged through two floors before exploding on the ground floor where the old women had been taken for extra safety.

"I cannot speak highly enough of the work of the staff," the Medical Superintendent told me.

“I soon reached the bombed block, but when I got there I found the nurses going calmly round the litter-covered beds soothing the patients”

"Male members of the staff were already searching the debris, and the co-operation of everyone was magnificent.

"One end •of the ward was demolished, but there was another door the other end, and we were able to get the-patients out that way

‘All the patients are somewhere around eighty years old, and a few of them were in tears, but the majority remained calm all through the ordeal."

Houses near the hospital were also hit, and people were buried beneath the debris,

Bombs also fell on a maternity hospital in the area. Mothers, babies and staff escaped.There were I8 mothers and I4 babies in a specially-protected ward on the ground floor,

Causalities were caused when bombs fell on a school used as an A.F.S and Ambulance station

NOTE: This sound like the bombing of the Royal London Hospital