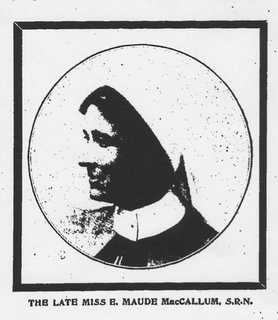 Maude MacCallum
Hon Secretary Professional Union of Trained Nurses
Maude MacCallum also known as Miss E Maude MacCallum was the daughter of Mr James W. MacCallum of and granddaughter of Major John MacCallum of . (her brother being John MacCallum).
Educated at St Margaret’s Hall, and subsequently entered , , where she took all the course open to women in those days.
She also matriculated at the Royal University of Ireland before entering at , .
After obtaining her nursing qualification she joined the Nurses Co-operation then located at 8, . She also carried out several years war work as a nurse.
She was elected a member of the Committee of the Co-operation and while serving upon it, originated and, with the help of two other far-seeing nurses, carried to a successful conclusion, the scheme for Sickness Benefit Fund and also originated the Benevolent fund , two of the most practical pieces of work for the benefit of Nurses of the Co-operation.
It was a personal experience which led Miss Maude MacCallum in 1919, to found the Professional union of Trained Nurses, (The first nursing union) for which injustice and tyranny touched her own life she realised how defenseless were many of her colleagues under similar conditions, and with unselfishness singleness of purpose she devoted herself thenceforth to the betterment of the conditions of the “working nurse” and to her protection from unqualified competition when trained.
The PUTN was registered as a Trade union in order to ensure that it should always be managed by nurses themselves.
The Professional Union of Trained Nurses worked closely with the Poor Law Workers Trade Union (later NUCO later COHSE) and MacCallun had her own page in the union’s journal “Monthly Notes”
The Nursing Times, then the Journal of the College of Nursing (RCN) referring to the growth in nursing trade unionism stated “Such a society will attract very few of the best nurses”
We believe the debt of gratitude which they owe her will be increasingly appreciated, as the truth of her favorite motto “Who would be free themselves must strike the blow” becomes more and more understood.
In February 1920, Miss Maude MacCallum was appointed a member of the first General Nursing Council (now Nursing & Midwifery Council NMC) by the minister of Health at the time Christopher Addison MP.
During her term of office she upheld the right of nurses to manage their own affairs and opposed medical and lay domination. She consistently voted for, and spoke in support of, proposals for the benefit of the nursing profession and opposed many recommendations of the majority which she considered inimical to its interest, in spite of derision and rudeness.
Speaking at the Scottish Nurses Club at on Friday 19th Mach 1920 MacCallum stated “The Professional Union of Trained Nurses must have been a much needed organisastion if one might judge from the bitter attacks made on its organisers.
“Who was afraid of being injured ? . besides, it would not be the nurses themselves who would be hurt by the action, as their conditions were so bad they could hardly be worse; besides, it was not to be expected that so much wrath should be poured forth just to prevent the nurses injuring themselves if they wished to do so. There must be some other interested threatened”.
At the same meeting she also highlighted a historical problem with nurse attitudes to trade unionism “Disabusing the minds of her hearers that trade unionism was synonymous with strikes, which she admitted. It was in her own mind until she went thoroughly into the matter”.
At a meeting of the PUTN on 1st February 1922 at 6 Nottingham Place, it was reported by the Professional Union of Trained Nurses Chairman Mrs Winifrede Paul “seldom have nurses been roused to such a pitch of indignation over anything as they have been at present by the treatment of Mrs Bedford Fenwick and the other independent nurses – including the secretary of the PUTN- have received at the hands of the College of Nursing Ltd”
MacCallun stated in 1923 after the with the help of Sir Alfred Mond Minister of Health had been able to “pack” the General Nursing Council of 1923 to exclude opposition, including Mrs Bedford Fenwick that the PUTN was “The principle thing that stood between them and serfdom”.
The Professional Union of Trained Nurses had by July 1921 established an “” with the Medico-Political Union (Doctors union). The PUTN was meeting regularly at the Plane Tree Restaurant,
She suffered from a “corroding disease” (undoubtedly Cancer) which ultimately caused her death, she made no mention of it to her nearest or dearest.
She finally resigned as Honorary Secretary of the Professional Union of Trained Nurses in 1926 on grounds of her health.

In her last few days she was nursed at the in Euston and died on the morning of .
Her service was held at St Pancras Church and was conducted by Rev Prebendary Metcalfe and Rev W.E. Kingsbury Secretary of the Actors Union.
Suspended at the lower end of the coffin was a laurel wreath with roses and a message “in loving remembrance from the PUTN” tied with its colours.

Professional Union of Trained Nurses established in 1920 with 268 members. The union ceased to exist by 1930
Posted by Michael Walker at Wednesday, July 19, 2006