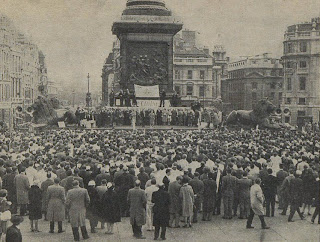 Only Trades Unionism Can Win - Lesson of Rally

THE thousands of COHSE nurses who marched in procession from Marble Arch to on Saturday, 28April 1962, in 's biggest-ever demonstration by hospital staffs struck a blow for trades unionism which may

become historic. They didn't march in masks for fear of victimisation as student nurses did 14 years ago. They acted on Union advice to wear uniforms and not be afraid of being disciplined.

A Paddington matron who ordered one of her students to wear a "penance gown" for parading in uniform very quickly quashed the order when newspapers and M.P.s denounced the punishment as a stupid survival of Victorian days.

Male nurses, many in white coats, made up about half of the total turn-out which included coach loads from as far apart as Bodmin, Cornwall and North Scotland.

More coach loads were in preparation for the Whitley Council Staff Side rally of 7,000 nurses at Albert Hall, , as this Journal went to press.

A large proportion of the 7,000 new members enrolled since the dispute are women—an indication that the bogy of anti-trades unionism in the general hospitals is being laid.

As the general secretary told the Association of Matrons, "With 40,000 nursing members the confederation now represents well over 50 per cent of organised nurses. The time has arrived when there is need for trade union machinery to represent nurses and not professional bodies appointed for other purposes."

When the marchers reached Trafalgar Square one could see a forest of banners and posters bearing such slogans as "Angels are needled",

"The Lamp is Dim". One depicted a bottle marked "2.5 per cent—NOT TO BE TAKEN", Another showed the same bottle being tilted into a flask with the wording "This is a poor tonic, Enoch." (Enoch Powell Secretary of State for Health)

Vice-President Ron Farmer as chairman had an easy task in controlling a good-humoured audience, and General Secretary Jepson, showing no signs of his strenuous campaign, received a rousing ovation. His hard-hitting speech was followed by equally vigorous one from Mr. Kenneth Robinson, Labour M.P. for St. Pancras North and chairman of the Party's mental health committee. But it was ex-Matron Mary G. Burns (N.E.C.) who roused the student nurses into

roaring "We are". When she asked: "How many of you have still to go to lectures in your off-duty time? Have worked four or five months on night duty? Have been sent away on holiday and had to come back to take an exam?"

Support for the nurses came from hundreds of organisations including the British Medical Association and the T.U.C. Many industrial workers took unofficial strike action in support of the claim and a position was reached when both the T.U.C. through its chairman. Miss Anne Godwin, and the Confederation, through the general secretary issued warnings that unofficial stoppages could become more of a hindrance than a help to the nurses' claim.

One of the first and by far the biggest of the sympathy stoppages was by 37,000 workers at Ford's, Dagenham, when the management retaliated by calling off their own pay talks.

Members responded splendidly to the call to write protest letters to the Prime Minister and the Health Minister—enclosed in black-edged envelopes where possible.

Reports of regional rallies addressed by the general secretary and other officers are on the next two pages.

'S first demonstration at Caxton Hall, , exceeded all expectations and was an exciting foretaste of what was to follow up and down the country;

Also Dockers on strike 28th April, Tanker drivers 26th April and many more in support of the COHSE Nurses campaign