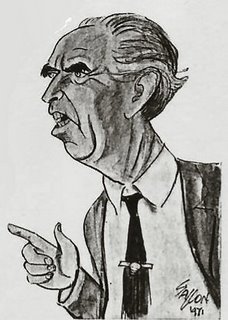 1971 was an eventful year for COHSE. It was an exciting year, a year of great activity and a year of progress. We had difficulties but we also had successes. As the year ended it could be said that the Confederation was stronger in membership and finance than ever before.

We were not able fully to implement our policy of two officers for each region. But we are much nearer the goal. Perhaps we will achieve it in 1972.

Our membership has increased considerably and although as I write I am not able to give the final figure it is obvious that our total membership will far exceed 100,000. Many reasons may be given for our success but to me there is only one. the loyalty and hard work of branch officers and key members must be the main factor. Together with the activities of our officers and the attention that is given to all matters affecting the membership, this has created the confidence in COHSE which is now reflected in these greater numbers.

During the year we concentrated on service to members and every effort was made to ensure that important information was circulated quickly and in detail. In one respect, however, we were not successful - the Journal. Due to problems completely outside our control Journal distribution broke down hopelessly. We did our best to remedy the defect but this was not possible.

I suppose we received more letters on this subject than on any other single matter and eventually we had to make a complete change by seeking a different printer. The first issue under the new regime was the December Journal. In addition wedecided on a fresh look and we hope that its new look will please members and, what is more important, that Journals will be delivered on time.

We have given very serious consideration to our printed matter. This should reflect a good image. We hope to introduce a new look in our literature beginning in February.

Following the decision of Conference we were able to make a start on providing cars for our officers. This has had a good effect and we will continue until our programme is complete.

New offices are being acquired in our regions. The first to be opened was in No. 3 Region, followed very closely by a new office in No. 4. These offices provide better accommodation for officers and staff, and, again, present a better image. This is the pattern we hope to continue. We have hidden our light under a bushel for too long.

We are playing a much greater part in negotiations under the leadership of Mr. Spanswick and Mr. Williams and our officers are frequently called upon to lecture to management courses. This is some recognition of their capacity to deal with the vast problems which are arising from the change in the service.

In education we are making progress and more of our officers and individual members are being given the opportunity to attend courses designed by the TUC and the Department of Health specifically for staff employed in the public service. In addition we are acquiring modern equipment, both at head office and in the regions, to ensure greater efficiency and improved service to our members.

We have had a busy year. There has been much hard work by all concerned and we still have a lot to do. We cannot rest on our oars and we will continue to strive to achieve the best we can. It is not going to be easy particularly in the field of negotiation. The present Government policy on wage restraint will be difficult to overcome but we must fight to get justice for those who are employed in the Health Service.

The greatly increased membership will help. Whatever the philosophers may say, Might is still Right in this competitive world and our people have suffered for too long under this policy. We ask for a fair deal. The National Health Service is worth-while but it must not be provided at the expense of those who staff it.

On behalf of COHSE I wish to express thanks and appreciation to members, branch officers and staff who have made 1971 so memorable and I look to 1972 with confidence.
A Happy New Year to you all.