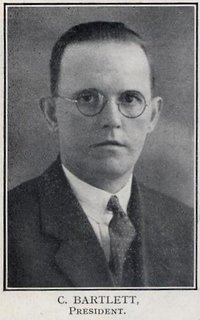 An appreciation, by Frank Lynch

It is always distressing to write about the death of an old comrade, yet it is right and proper that respects should be paid.

Claude Bartlett died on at his home in Ivybridge, nr , , at the age of 74. He was a remarkable yet unassuming man. He entered the hospital service at an early age and joined the Asylum Workers Union in 1919 and became active in the local branch. In 1927 he was elected President of the (taking over from Mr E.R. Blackburn) and he was re-elected without a break until he retired in 1962, a period of 35 years. For this period he was the local branch secretary at the hospital where he was employed as a charge nurse. In 1946 he presided over the amalgamation discussions and was elected again as President of the new which he helped to create the Confederation of Health Service Employees (COHSE).

I first met Claude Bartlett at the Amalgamation Dinner in the Queen's Hotel, , in December 1946, following the joint meeting of the two National Executive Committees. He was never a talkative man and he will be best known by the excellent manner in which he presided over Delegate Conference, where his brisk and objective approach was most evident.

When George Gibson retired as General Secretary of the in 1948, Mr. was appointed to the vacant seat on the TUC General Council and at the
Congress later in that year he was elected in his own right by a substantial vote. It is not often that a lay member of a union is able to secure election to that august body but Claude Bartlett went even further.

In 1959 he was elected as President of the TUC and it could be that he was the only person who was not a full-time trade union officer to be so honoured. His conduct of Congress brought him many tributes at the end of his term of office.

In 1962, after a long and eventful career he decided to retire, having been awarded the CBE in 1960. At a small gathering of the National Executive Committee and invited guests held in to mark his retirement, he said: "They have been 35 happy years, crammed full of incident and endeavor and it is a profound gratification to know that my humble efforts have been so widely and generously recognised."

Goodbye Claude, let those words be your epitaph.

Sammy Lee, COHSE Life Member, writes: "I was grieved to learn of the demise of Claude Bartlett our President for many years. "I recall the many conferences of our he presided over. "I feel sure something rubbed off from him that made all who came into contact with him a better person. "It makes me proud to have known him."

He stood as a candidate in local District elections 1925, failed at his first attempt but elected to Parish council

His wife was killed by a driver on