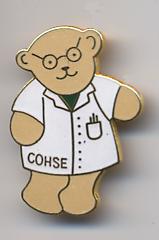 At long last, doctors, hospital technicians, and other specialist grades are realising that Olympian aloofness is no match for Trade Union solidarity in gaining long-overdue improvements in salaries and conditions of service, with tile result that there is a steady stream of recruits—doctors, dentists, pharmacists, radiologists, etc.—towards the goal of ONE organisation of ALL Health Workers to meet the changes of the coming National Health Service.

Highly successful open meetings have been held recently in , and Miss L. Mitchell, the Guild's Hon. Secretary, , New Southgate, , has been inundated with inquiries.

At the first of these over which Dr. Jeger, (Member of Parliament), the COHSE Guild's London Regional Chairman, presided, Dr. Charles Brook, leader of the Labour Group on the Kent County Council, stressed that the Guild in no way conflicted with the strictly professional bodies like the B.M.A., or the B.D.A., etc., in which Guild members should still retain their membership.

When he was a member of the L.C.C., he had seen many examples of the professional bodies putting cases very badly in contrast with our own Organisation, and C.O.H.S.E., with its well-established machinery and competent officers in every region, could meet the needs of all Health Workers employed in
the new Health Service.

The proposed Regional Boards were bound to give decisions from time to time affecting all sections, which made the need for a united body all the more essential.

Dr. Charles Brook stressed there was full democratic control in our Organisation, and said in the "teething stage" of the new Health Centres there were bound to be problems which could lie examined by each section or guild and by the Organisation as a whole.

Under the wise guidance of the General Secretary and the Union officials, the Medical Services Guild would prove in-valuable to those employed in the new Health Service. Any member would have the full support and backing of a large and powerful organisation.

This aspect was also touched upon by Dr. Jeger, who said that C.O.H.S.E. knew no class distinction. The only concession to the various sections was to organise them in their own particular Guild in order that special matters relating to the individual sections could be thoroughly discussed.

The aim of the Confederation was to raise the standard of service, and to see to it that everybody employed in the Service worked under ideal conditions.

Other speakers emphasised that technical staffs had been less successful than other Health Workers in securing improvements because they had not been so well organised.

Mr. Kirby, a radiographer, said they had only to look at the new wage scales to see what a mess the professional bodies had made.

"The medical ancillary services," he added, "used to think the professional bodies would do all that was necessary for them, but if we are to conduct negotiations with the Health Minister and other bodies concerned, our organisation within the Confederation is essential."

As a pharmacist of 20 years' standing, Miss Mitchell said special departments in the hospitals had developed enormously, and although they were staffed by officers with the highest qualifications, pay and conditions left much to be desired.

The Minister of Health had said that if the Services concerned were better organised they could speak with a stronger voice. By affiliation to the T.U.C. the Confederation had the weight of organised workers in support. Already in the Voluntary Hospital Service better conditions prevailed due to organised effort. Members of all grades had got together as never before. This was growing and should continue to do so. In closing, Miss Mitchell urged full co-operation to meet the changes about to take place in the Health Service.

Replying to a questioner, who said ancillary services had not obtained as many concessions as other grades, Miss Mitchell stressed that when wage rates were under discussion employing bodies knew that professional organisations would be easier to deal with and, therefore, the Trade Union representatives were not invited, with results which are now apparent.

Other replies stressed that there was no discrimination against members who "contracted-out" from the affiliation fee to the Labour Party, and to one questioner who suggested that Labour Party affiliation was a handicap in fighting Labour-controlled authority. Dr. Brook said from his own experience the two original bodies of C.O.H.S.E., the old Mental Health & Intuitional Workers Union and National Union County Officers, had always been the strongest fighters on behalf of their members, no matter which party controlled the authority.,-