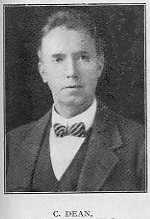 It is with the deepest regret that we record the sudden and unexpected passing of the late Charles H. Dean, former President of the Whittingham Branch, late member of the National Asylum workers Union National Executive Committee and a Trustee of the , on at the age of sixty-three years.

Evidence of the esteem and affection in which " Charlie Dean " was held in the district was provided at the funeral which took place on February I8th 1937 at St. Mary's, Goosnargh when a large congregation took part in the service conducted by the Rev. B. Boss.

A large number of male wises in uniform also attended, of whom R.Fazackerly, A. Dumbleton, . F. C..Robinson D. Williams, J. Watson, B. Fare, D. McKenzie, and A Little acted as bearers,

Amongst the many; beautiful floral tributes: were wreaths from the ’s National Executive Council and.-Officers of the union and from members of the; Whittingham Branch

The late Charlie Dean was ‘stalwart of trade unionism' He along with others in the dark and distant past brought into being the organisation we know to-day.

To belong to the Union in those days could easily result in the loss of one s ]ob ; yet men of the calibre of Dean worked hard and courageously in the face of official opposition and largely as a result of their efforts they have given-to us an organization and a record of achievement that stands

Charles Dean was also a candidate for NAWU President at the Seventh Annual conference in July 1921, Birmingham losing to W. Jones 1920-1922

By March 1918 Whittingham branch had 507 members, including 73 serving with the Colours (Army)