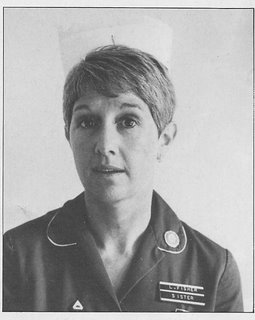 Lesley Fisher, I work as a night sister at 's Hospital in Tottenham, . I have been a nurse for 20 years and on I shall be on strike.

This action is not only, or even primarily, about pay. Nurses are extremely angry and bitter about the state of the NHS and frustrated that they cannot deliver the care their parents need. They are fed up with closures of wards and cuts in services, with staff shortages, with moral blackmail and exploitation, underfunding of pay awards and the government's declared intention of

cutting taxes rather than increasing health service funding. They are amazed at the hypocrisy of a government that, in the same week as it claims to care about shortage of specialist nurses, attempts to cut special duty payments. Nurses are incensed by Mrs Thatcher's speech in which she insisted that it is we nurses, driven to this action and at the end of our tether, who are guilty of ruining the NHS.

And, it must be said, our nurses were made extremely angry by Trevor Clay's divisive remark that his members are the only nurses who really care. This issue should not be turned into for an inter-union dispute. We are all nurses and we have the same problems and concerns. We must be united even if we have differences in tactical approach. We have open communication with local RCN members, many of whom found Trevor Clay's speech inflammatory and who have, subsequently, rejected the RCN in favour of NUPE.

We have tried other ways of signalling our feelings to cuts, closures and underfunding by all sorts of means — lobbies, petitions, demonstrations, candle-lit vigils, occupations, road-blocking and well-reasoned arguments — but the most that has been achieved are temporary respites. Parliamentary pressure doesn't work and Mrs Thatcher will not speak even with the distressed parents of sick children.

It seems that direct action by the nurses themselves is the only course left for us to take. After the action taken by 38 nurses in Man the government at least temporarily drew back from its intention to cut special duty payments. This has given us confidence in the effectiveness of strike action. But it will be a token withdrawal of labour. We will not be attempting to picket out other workers — this is not an industrial strike.

It goes without saying that nurses, what-ever union they belong to, will not desert patients or take part in any action detrimental to their care. As working nurses know, many clinical areas already function on skeleton staffing levels, and in many cases 'emergency cover' would mean more — not less — staff. This refutes the argument that patients will be affected by reduced staffing, levels in wards where nurses are taking action. In my own hospital, if enough agency nurses cannot be found, striking nurses will provide the cover and donate the money earned for that particular shift to charity. This will show that money is not the main issue of concern. We have talked with patients and they are immensely supportive and understand the reasons for our action.

Nurses do not take the decision to withdraw their labour lightly. We, in Haringey, have decided to take this action because we genuinely believe that only this will bring to the attention of public and politicians the ever-worsening plight of the NHS and its workers. We think that the government has ignored and under-estimated the real and growing concern that nurses feel for their patients and for the NHS, and we hope and pray that today will make the government realise that nurses are at the end of their tether. Without an increased commitment to the NHS, many more nurses will be withdrawing their labour permanently — and not just for 24 hours.

Born in Belfast 19 October 1946 , , came to Addenbrookes, Cambridge to train as a nurse, later worked at the Elizabeth Garratt Anderson (EGA) where she be came involved in NUPE, later worked at Wood Green and Southgate hospital) and St Ann's Hospital
NUPE National Nurses Advisory Committee Chair
UNISON National Nurses Committee Chair
Died Scarborough 9th January 2022
After retirement did voluntary work for Scarborough Samaritans Samaritan's
Died Scarborough 9th January 2022
Lesley loved the Sea almost as much as her handbags - and the hearse carrying her coffin made one last trip along the sea front before arriving at the cemetery cemetery
Posted by Michael Walker at Wednesday, April 26, 2006