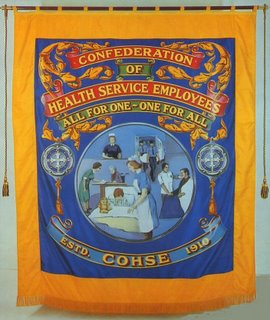 The Confederation of Health Service Employees (COHSE) was established on with a membership of 40,000.

COHSE was a merger of the Mental Hospital & Institutional Workers Union and the Hospitals & Welfare Services Union.

The need for merger was the belief in an "industrial union" within the proposed National Health Service (Established 5th July 1948).

The idea of including “Confederation" rather than union in the title was felt to be “all-embracing”, expressing the unity of all health staff and allowing for the expression of the views of “any particular or specialist service”.

It was felt that “COHSE” was the best way of shortening the title because it presented the image of a “real” “cosy” and progressive organisation.

Within the new union the dominate force was the MHIWU (25,000 members) with its base amongst nurses in the 's large psychiatric hospitals.

The union’s mental health origins go back to 1910 when the National Asylum Workers Union was established and soon secured a significant membership in the old psychiatric hospitals (Asylum).

“All for One and One For all