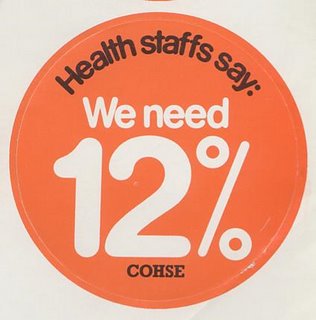 The national executive's committee's emergency resolution, calling for a stepping up of the fight for a 12 per cent pay increase, was carried with only

There were however repeated calls in the debate for all - out strike action and Mrs. Thatcher will find no consolation whatever in the more alanced decision of

conference to continue and extend the action already, begun. The union's general secretary, Alert Spanswick, said that the Tory government was on the run

"I believe we have already won the hearts and minds, not only of our members, but also of people of this country."

Never before had there been such an overwhelming chorus of criticism of government policy from the press, from patients and from the public.

my privilege to witness," he said. Mr. Spanswick expressed a special thanks "to all the miners, the steel workers, to dockers and the seamen and all those thousand's of other trade union members who joined us on the one-day strikes of June 4 and June 8 and who will be joining us again on June 23."

The executive's resolution calls for the pay campaign to continue with selective withdrawal of key groups of staff, designed to reduce the NHS to, an accident arid emergency service only by the end of June.

It also called for increased support from the (trade union movement, including industrial action by other trade unions and financial and organisational support.

Mike Murphy, Maidstone, said that selective strikes were ineffective. He said that both members and patients suffered by piecemeal action "let's make It quick, sharp and short. Let's go all out and get it over with."

Andrea Campbell, Hackney, said that after all the selective stoppages had taken place members were no closer now than at the start., "We have got to take all-out strike action. We accept the NEC's resolution, it is going . to be a long hard road and we are not going to get anywhere."

Bill Dunn, (Ambulance man) Hanwell branch, asked how long the union could hold out in the event of an all-out strike and urged delegates: "Don't play into Mrs. Thatcher's hands. "She would love to go to the Tory conference to say that she had broken the health service unions." He urged delegates to support the NEC resolution.

Mr. Spanswick made it clear that the union was serving notice that industrial action would continue until the government conceded the claim.

There were now about 650 hospitals working on the basis of accident and emergency admissions only, and a further 1,500 hospitals were affected by disruptive action. It was wrong to suggest that the present strategy and tactics would not bring success. "What we have to do now is to extend and develop the actions we are already taking."

A special mass meeting of seafarers from

Newport. and Barry yesterday promised health workers "any support or action they require during the dispute." The resolution; will be put into action today when seafarers Join the picket join outside St. David's, Sully and Hamadryad Hospitals, and later join striking miners and health workers on a demonstration through the streets of Cardiff.