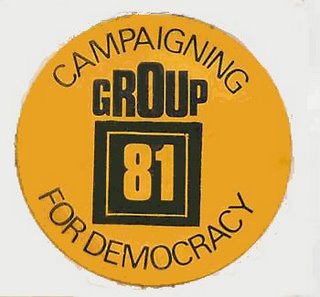 The first newsletter of Group 81 produced at the end of the 1981 COHSE Conference.

Group 81 was effectively the very "broad based" broad left in COHSE.

Well comrades the farce that was the 1981 (so called) delegate conference is now over. As members go back to their normal routines the feelings of anger and frustration that were so apparent at conference recede. It is important that we stir those feelings again reminding delegates of the blatant control and manipulation that took place a Bridlington. We must also use these opportunities to inform people about the functions and aims of “ Group 81”. We must be seen as an “open conspiracy” willing to discuss our membership of Group 81 with anyone

2. Accountability and democracy within COHSE

4. Eradication of all private medicine

8. Equality of all races, creeds, colours and sex

If any member is preparing to stand in N.E.C. elections could we suggest tat they do so on a group 81 platform. This would give an opportunity for policies to be discussed and an indication of the potential support we could have within the union, along with the obvious benefits of having a left inclined N.E.C.

"That this Regional Council supports the aims of" Group 81"." Again this would

the regions. This tactic allows "Group 81" to be seen as an active and

functioning force within the union.

We in-bended to produce badges for the September Regional Council and a magazine around Christmas. Unfortunately these ventures will cost money and branches •which wish to sponsor "Group 81" should send cheques made payable to "Group 81", C/0 Peter Haworth, 55 Millmoor Crescent, Eynsham, Oxon. Bangour 906 and 645 branches have both contributed £50 to the above fund.

Any member wishing to contribute to a magazine could they please submit articles to myself by the first week in November, We hope to produce a good magazine which will be available for distribution at the January Regional Councils

Corades this is going to be our most important task over the next two months.

According to various calculations the Confederations votes at the Labour Party

battle. The N.E.C. are due to meet on the 6th and 7th of August when they will

decide how the branches are to be consulted over the leadership question. We

must make sure that every branch which supports Tony Benn feeds this information back to Banstead. Hopefully the vast majority of apathetic branches who do not reply to Head Office circulars will maintain their normal consistency. For example to mount a campaign of support for Tony Benn would be counter-productive in but personal contact will work. Each member is asked to assess their region and use their own "judgment^ in maximising support for Benn.

This has been a very quickly drawn 'news letter to keep delegates .thinking

about "Group 81",Remember we will only survive by your activity.

NOTE:
Did Jim Devine get the name Group 81 from the 79 Group the left wing groupiing within the Scottish National Party (later expelled)