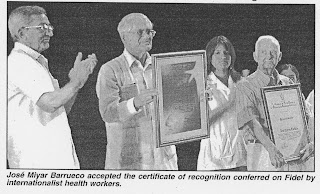 More than 140,000 Cuban health workers have lent their services in Latin America, the Caribbean, Africa and Asia since 1963, when the first brigade left for Algeria , to this May 23, when 35 doctors and paramedics arrived in Sichuan to treat those injured in the earthquake
BY JOSE A. DE LA OSA
Begining of Internationalist Medical Cooperation remembered

THE tradition of internationalism, begun 45 years ago when Cuba sent its first medical brigade to Algeria , was commemorated on Monday, May 26 in Havana , with a tribute to the pioneers of that cooperation in solidarity, and the 140,000-plus health workers who have provided a concrete expression of the humanist essence of our socialist society.
None of it would have been possible without the Revolution led by Fidel, his ideas, his thinking and above all, his feelings about human beings, affirmed Doctor Jose Ramon Balaguer, member of the Political Bureau and minister of public health.

For that reason, a certificate of recognition was presented to Fidel, "For having taught us that providing health care is showing love, that there is nothing more beautiful than a child's laugh, a 'thank-you' from a mother, a loving look from an elderly person; that those are the best and most valuable rewards for any sacrifice."

Jose Ramon Machado Ventura, member of the Political Bureau and first vice president of the Councils of State and Ministers, travelled to Algeria as the head of the first medical brigade and as Cuba 's minister of public health at the time.

Balaguer said that health workers face a gigantic task: attending to the excluded men and women of this world, some 70 million people, and providing attention with quality, affection and love to our people who — he emphasized — deserve the best.

Doctor Oscar Fernandez Mel received a certificate of recognition in the name of the medical brigade members who went to Chile after the earthquake in the early 1960s.
Other speakers at the tribute were Doctor Elis Alberto Gonzalez Polanco, director of the Central Unit of Cuban Medical Cooperation; dentist Eduardo Llanes, one of the first health care internationalists, and sixth-year medical student Orlando de la Paz.
Posted by Michael Walker at Tuesday, June 17, 2008