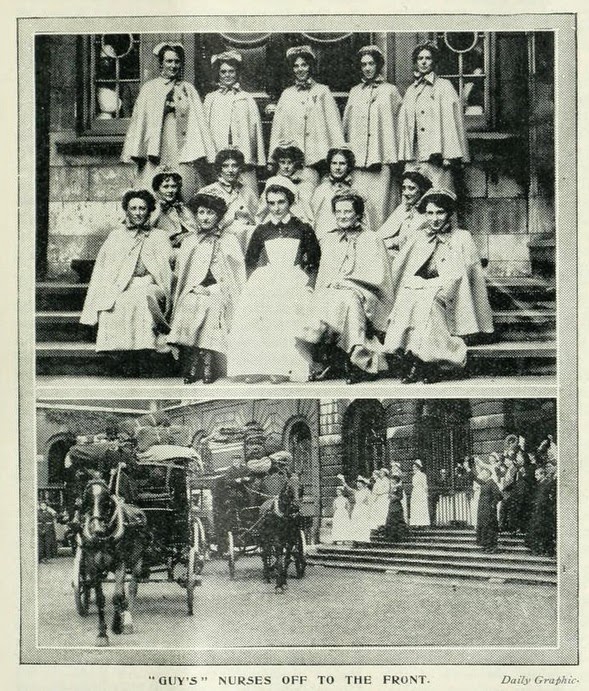 Nurses wishing to volunteer for active service must do so at the office of the British Red Cross Society, which is now established at Devonshire House, Piccadilly, London, (now Green Park tube station) by the kindness of the Duke of Devonshire who has placed the whole of the ground floor at the disposal of the committee.
Devonshire house is easily identified by the Red Cross flag which floats over it. Nurses engaged in hospitals or on the staffs of private nursing institutions or district nursing associations should first get the assent of the matron or superintendent.

On inquiring at the medical department of the Admiralty we learn that many applications are made there by nurses of varying qualifications the authorities are not in need of nurses or desirous of enrolling them and it is unlikely that the services will be utilised if offered their.

Many hundreds of applications are also made at the War office. In both instances application should be made through the British Red Cross Society.
Applications for enrollment in the international nursing corps of active service in the war, up from three years certified nurses should be made at headquarters of the International Council of nurses for 431 Oxford Street London executive of the National Union of Trained Nurses is desired to offer them to the central office at 39 Great Smith Street, Westminster as a clearing house of trained nurse volunteers
------------------------

War having been declared the voluntary aid detachments (VAD) have ceased to be under the orders of the British Red Cross Society are now under the local military authorities with whom they are registered. The organisation of the society will be employed to assist any detachment mobilised by Reid furnishing stores and drugs and in supplying hospitals and general comforts