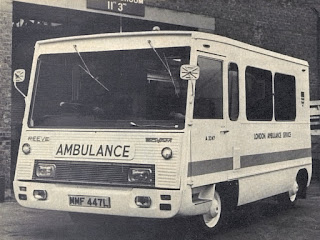 On 30 January 1973, Sir Desmond Plummer, Leader of the GLC, handed over a new prototype ambulance to the London Ambulance Service.
The new ambulance, designed to meet the specifications of the Ministry of Health's Miller Report of 1967 and the Ogle Report, sponsored by the National Research Development Corporstion in 1969, will mean greater comfort for the patient (with its front wheel drive and independent suspension) and should be far more acceptable to the crew, in so far as there is full standing height inside and the step height into the vehicle is only 9 inches (as compared with an average of 23 inches in existing ambulances).
Whilst the interior is scarcely bigger overall, the design of the new ambulance manages to provide much more room for and access to the two patients, with space for an attendant to sit at the head of the stretcher.
Under the Government's planned re-organisation of the Health Service, control over the London Ambulance Service will pass from the GLC to one of London's four Regional Hospital Authorities. Sir Desmond took the opportunity of expressing his concern over this proposal and hoped that the Government would have 'second thoughts about removing such a vital  service  from  the  control  of  the democratically elected representatives of
the people'.