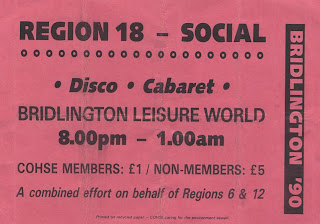 Night out for Rebels and Reds
Cabaret
Comedy act Jo Brand (COHSE nurse member at the Maudsley hospital, London and then staring in Saturday Night Live), Skint Video, Rebels with a cause and Disco

Probably one of the best COHSE socials ever, certainly with Jo Brand one of the most controversial, which led to formal complaints about her act, as she turned effectively on right wing, sexist delegates who had attended in error. Infact it was the last joint regional social, such was the outcry in Region 12

Other socials at 1990 COHSE conference included

Most nights COHSE delegates ended up at the harbour lights Disco
Posted by Michael Walker at Saturday, February 09, 2008