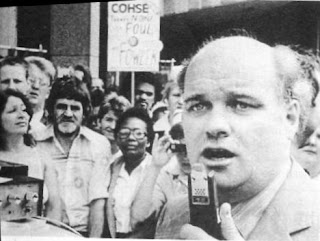 Full Confederation of Health Service Employees (COHSE The health care union)) backing has been pledged to electricians' leader Sean Geraghty who faces a fine and heavy legal costs after his members held up the Fleet Street printing presses on 11th August 1982 in support of the NHS pay campaign during the 9-13th protest week of action.

Sean Geraghty, secretary of the London Press Branch of the Electricians Union (ETU), was fined £350 for contempt of court and ordered to pay court costs after his 1,300 members disobeyed an injunction obtained by the Newspaper Publishers' Association (NPA) to stop the threatened twenty-four hour strike on 11 August. 1982.

COHSE has offered to pay the fine and contribute towards the costs, expected to be a massive £10,000, incurred after a court appearance lasting only a few minutes.

The NPA brought the case against Mr Sean Geraghty for breaching the injunction. Under the 1980 Employment Act, the courts could have sent him to jail and he still faces prison if he fails to pay the fine by October. The electricians' branch has yet to decide whether the fine should be met.

Hundreds of NHS workers marched from St Bartholomew's Hospital in to the High Court in on , the day of the hearing.COHSE members from Regions 5, 6, and 8 were well represented both outside the court and at the Department of Health & Social Security’s London headquarters at the Elephant and Castle, where demonstrators joined the vigil organised by London health staff for the week long protest. 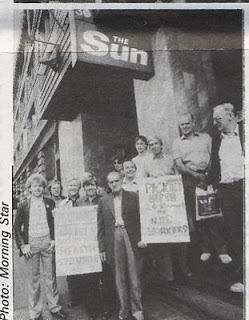 Although COHSE initially expressed concern that the Fleet Street action would distract publicity from the health staffs' case, COHSE General Secretary Albert Spanswick described the electricians' stoppaqe as a wonderful gesture of solidarity' and warned at serious action' would result if Mr Geraghty was imprisoned

NOTE:
The threat under new anti trade union laws to jail Sean Geraghty, led to a surge of support for the campaign. Unquestionably, had he been jailed, the industrial action in response would have significant from the unions. 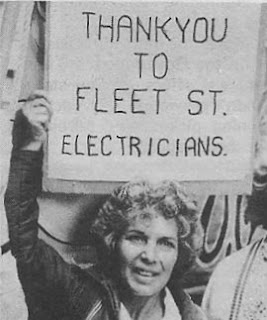 However, the Tories anti trade union Law had been especially drafted to ensure that their could be no Martyrs, for the movement to organise around.

The right wing Electricians Union were also not happy with this act of solidarity and tried to break up the branch ad discipline Geraghty.