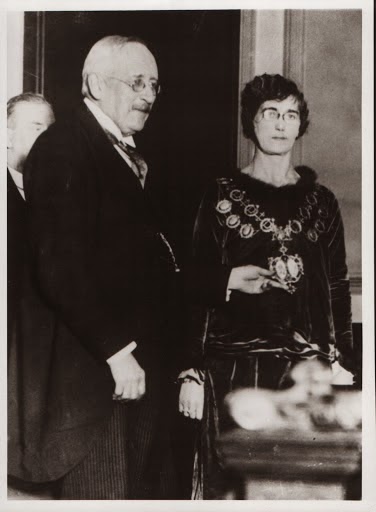 Student at Scott-Lidgett’s, Bermondsey University Settlement and an orignal member of the "Beatrice" Dunkin, Club for Girls

Helped in the election of Will Crook’s as MP for Woolwich, one of the first Labour MP’s

A school manager from 1902-1927, Swimming and Gymnastics lecturer for the London county Council Schools & Welfare Board

One of the first elected women Mayor’s in Britain, Deptford Mayor 1927-1928
Married Mr E. C. Drapper also a Labour Councillor who died in 1945

Helped establish NUCO at St Alfege’s hospital, Greenwich in 1918
Helped organise the feeding of Dockers families during the 1912 dock strike and was a leading figure in the campaign against the Chair of the Port of London authority who kept the Dockers in poverty. She was not alone

She was heavily involved in a case involving Peggy O'Neil a nurse suffering from TB of the spine (not then an industrial injury) and a bed patient for six years, with Beatrice help she was able to help Nurse O'Neil start a new life in America.


Justice of the Peace 1921 for Blackheath division

During the 1921 she helped feed up to one thousand Dockers at deptford Central hall during the strike "cycling from her home at 5am in the morning in order to serve breakfast".She bought two shops in Deptford and converted them into a club for striking women tin workers who she helped organise into a union, serving 200 meat and veg meals daily at 4d a meal.

The tin workers suffered terrible conditions and were pitifully paid. When they were taken to court for daring to strike she organised coaches to take the women tin workers to the Law courts hearings

Beatrice Drapper retired December 1946 after 17years employment by the union