Dr Alan Ruscoe Clarke left the patronage of the voluntary, charitable hospital system for a salaried job in the London County Council system of the early 1930s. This was then anathema to the majority of the medical profession. He would become a pioneer of advanced trauma surgery.

He and his wife, Avis, met whilst both worked, she as a nurse and he as a doctor, at Mile End hospital where they had treated the wounded from both sides in the Battle of Cable Street and raised support for Republican Spain during the civil war. 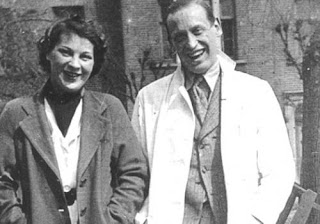 Michael Walker remembers Avis telling him a story about how, when Ruscoe was in the Royal Army Medical Corps in North Africa during the Second World War, a German SS officer complained to one of the orderlies that, after his capture, his arm had been set in a cast and a nurse had somehow engraved in the plaster the image of a hammer and sickle. The SS officer demanded to see the commanding officer to complaint about this insult and was duly ushered into a room to see one Dr Ruscoe Clarke, who was a little more than unsympathetic to the SS officer’s plight!
Afterwards, Ruscoe Clarke settled in Birmingham with his wife Avis (Avis worked as Industrial nurse at Hercules Bicycle Ltd). In post-war Birmingham, Avis was secretary of the Birmingham Peace Committee from 1949 to 1959, as well as a Communist Party medical activist, nurse and health visitor.
Ruscoe was a medical researcher and a trauma specialist at Birmingham Accident Hospital from 1947 and later worked at the newly built Queen Elizabeth Hospital. He and his team measured red cell volumes to estimate average blood loss and showed that early transfusion of the correct volume of whole blood appeared to lead to the best chance of quick and full recovery from serious injury.
His medical research work is still highly regarded in the profession, his research papers still being cited, and the Royal College of Surgeons commemorated him in a long-running Ruscoe Clarke Memorial Lecture. His work is constantly cited, for example his 1941 report of the separation of a portion of the liver following a gunshot wound was only recently used as an authority.

The following quote and reminiscence of Dr Ruscoe-Clarke appears in the Indian Journal of Plastic Surgery:  "Keep the goals of your research simple and clinically relevant, even if the methods of investigation have to be complicated" Mr. Ruscoe-Clarke, Birmingham Accident Hospital (1951). The distinguished medical researcher, H Srinivasan, recalls: "By chance, I got an opportunity to work under Mr. Ruscoe-Clarke at Birmingham Accident Hospital, the only hospital in the UK at that time wholly devoted to trauma including burns. As may be expected, "shock" was a major topic of research in that institution. I was impressed by Ruscoe-Clarke's approach to research, which was clinical and at the same time based on measurement using simple techniques possible for all. His methods of assessment of blood loss are good examples of this approach. For example, he showed that a handful of blood clot represented about half a litre of whole blood, and that an increase in the circumference of the thigh at its middle by one inch indicated increase in the volume of the thigh by about a litre, due to, say, bleeding from a fractured femur." [http://www.ijps.org/article.asp?issn=0970-0358;year=2004;volume=37;issue=1;spage=8;epage=17;aulast=Srinivasan;
"Understanding the hand: A paradigm for research as self-education" by H Srinivasan, First Seaward Road, Chennai - 600 041, India]
In the run-up to the formation of the National Health Service, Avis recalled: “Ruscoe came home white and shaking after a meeting at Birmingham Town Hall in 1947.... All the doctors in Birmingham were opposing the very concept of a National Health Service and supporting the retention of private practice. Ruscoe was the only doctor to speak in favour of the NHS and abolition of private patients.”
Ruscoe Clarke was one of the key founders of the British Sigerist Society (1948-1956)
Ruscoe Clarke died suddenly and relatively early in life in 1959 but his memory still resonates in the medical profession. Extraordinarily, over a half a century after his death, in a lecture at the 2006 AGM of the Institute of Bio-Medical Science in Solihull, West Midlands, Kenneth Hughes, ended with a “poignant recording of Paul Robeson, the American singer and spokesman for human rights, singing Jerusalem”.
This, it seems was sung by Robeson “at the funeral of his friend Ruscoe Clark, a surgeon based at Birmingham Accident Hospital and a staunch fellow communist. Clark and Robeson had developed their friendship through regular correspondence. On a trip to England Robeson travelled to the Midlands to visit his friend for the first time but sadly Clark had died only a few days before.
This final story had a personal touch as several members of the audience remembered and shared anecdotes about Ruscoe Clark.”
http://www.ibms.org/index.cfm?method=science.history_zone&subpage=history_midlands

As Ruscoe Clarke, “MBE,MB, FRCS (Eng.)”, he was the author and editor of the 1959 “Modern Trends in Accident Surgery and Medicine”, which is still considered to be a model text in its field.