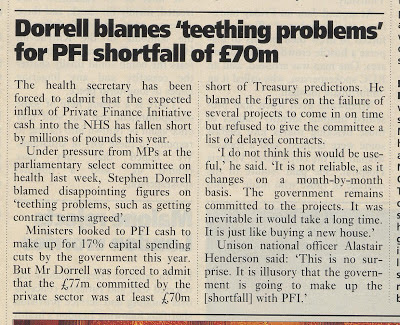 In 1992 PFI was implemented for the first time in the UK by the Conservative government of John Major.

In 2002 UNISON attempted to rally support at Labour Party and Lib Dem national conferences against PFI, both leadership (and also the Conservative Party) maintained support for PFI,  only at Labour Party did the motion opposing PFI succeed and was promptly ignored by the leadership

In July 1996 The health secretary was forced to admit that the expected influx of Private Finance Initiative cash into the NHS has fallen short by millions of pounds this year.

Under pressure from MPs at the parliamentary select committee on health last week, Stephen Dorrell blamed disappointing figures on 'teething problems, such as getting contract terms agreed'.

Ministers looked to PFI cash to make up for 17% capital spending cuts by the government this year.

But Mr Dorrell was forced to admit that the £77m committed by the private sector was at least £70m
short of Treasury predictions. He blamed the figures on the failure of several projects to come in on time
but refused to give the committee a list of delayed contracts.

'I do not think this would be useful,' he said. 'It is not reliable, as it changes  on  a  month-by-month
basis.  The  government  remains committed to the projects. It was inevitable it would take a long time.It is just like buying a new house.

Unison national officer Alastair Henderson said: 'This is no surprise. It is illusory that the government is going to make up the [shortfall] with PFI.'