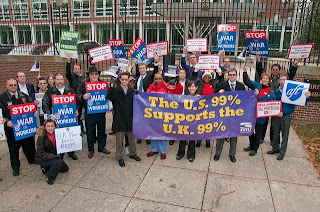 US Nurses backed our pension protests

National Nurses United members and other US trades unionists march outside the British Embassy in Washington DC. Photo NNU

As trailled extensively on Stronger Unions last night, one example of international solidarity for our day of action against pension injustice came from our brothers and sisters in the USA, and in particular the National Nurses Union (NNU). Details are still coming through (California is 8 hours behind us), but there were protests outside the UK Embassy in Washington DC, and outside consulates in Boston, Chicago, Orlando, San Francisco and Las Vegas, and letters were handed in at each location. You can see photos of the actions online, and the story even made Le Figaro in Paris, France. The Daily Kos reported that “the United Steel Workers, Teamsters, AFT, ATU, SEIU, AFL central labor councils, Unite-Here, and members of Occupy DC and Occupy Chicago, were among labor and community activists joining the solidarity actions.”

“Even though we all live in different parts of the world, we are all fighting for the same issues,”

In her letter, addressed to Sir Nigel Sheinwald, British Ambassador to the US, NNU Executive Director RoseAnn DeMoro wrote:

“We urge the British government to stop its attempt to make public-sector workers pay more and work longer to receive a smaller pension when they retire. The government’s plans will impact women the most, who already suffer from lower pensions. This attack on the people who provide patient care at the National Health Service, teach school children, and provide essential public services is unconscionable.”