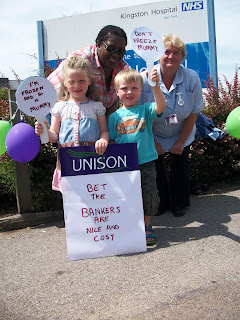 UNISON, the UK¹s largest union, today reacted angrily to news that the Government is freezing pay for all NHS workers, except those earning below £21,000, calling it ³a bitter blow² for hardworking staff including nurses, paramedics and therapists.

The union dismissed the £250 for those earning under £21,000 such as cleaners, healthcare assistants, cooks, porters and switchboard staff as a totally inadequate token gesture. The increase is below inflation and with the cost of everyday essentials rising, it will be wiped out very quickly.

UNISON is holding its health conference next month in Liverpool where it is widely expected that delegates will vote to reject attempts to reduce pay, as well as pledging to fight back to preserve jobs and services.

The NHS Pay Review Body was hide-bound by the Government¹s pay freeze diktat
across the public sector and the union warned that staff are already angry over Government interference with the independence of the PRB and today's decision will rile health workers further.

To add to health workers¹ problems the pay freeze comes hard on the heels of increased pensions¹ contributions in the recent Hutton report.

³The Government¹s decision to freeze pay is another bitter blow for hard-working NHS staff.

³The squeeze on NHS finance is already placing a heavy burden on health workers. They see jobs being cut, operations cancelled or delayed and patients suffering as a result.

³It is completely unjust for the Government to make nurses, paramedics, therapists and skilled NHS staff the fall-guys for the financial crisis brought down on the country by the bankers.

³The £250 is a totally inadequate token gesture designed to salve the conscience of coalition MPs. They know that health workers did not cause the crisis, that inflation is going up and that families, already struggling with mounting debts and rising inflation, will suffer because of their decision today.

³I expect widespread anger over pay at UNISON¹s Health Conference next month. The job cuts, cancelled operations and longer waiting times are deeply distressing for health workers and the pay freeze is likely to be the final straw.²

This is the 4th year out of 5 that health workers have had a below inflation
pay award.

In real terms NHS pay has now fallen back to pre 2005 levels.


The Coalition of millionaires reward greedy bankers and cut the pay of nurses.