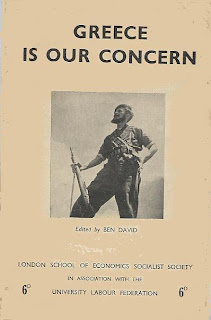 An appeal has been made by the Socialist Medical Association (SMA) to the Greek Premier and King Constantine to obtain the release of Dr. Manolis Siganos, a political prisoner who is gravely ill.

Earl Bertrand Russell yesterday sent a cable to Premier Papandreou urging Dr. Siganos' immediate release—"his continued cruel detention can only discredit Greece throughout the world,"' he said. Dr. Siganos, in his mid-fifties, has just had another heart attack in St. Paul Prison Hospital in Athens.

He is one of the 100 men and eight women who are still held as political prisoners in Greece. Dr. David Kerr, Labour M.P. for Wandsworth Central, has taken up his case.

Dr. Siganos was first jailed before the war for his opposition to the Metaxas dictatorship, and was among those handed over to the Italians and Germans in 1941 by the Greek Fascists. 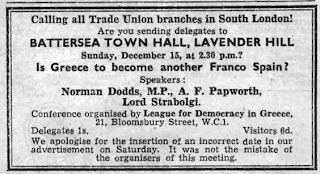 He was sentenced again in 1955 for his political activities. An appeal to the Council of

Grace resulted in a cut of his sentence to ten years, but a recommendation by the then Minister of Justice that it should be cut to nine because of his ill-health—which would have meant his immediate release — was vetoed by the King. 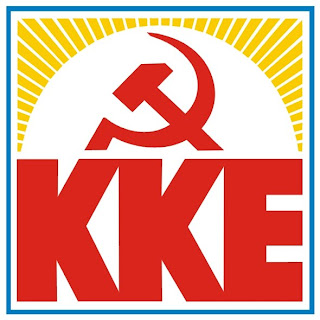 have served two-thirds of their sentence have been rejected, though he has only nine more months to serve.

The League for Democracy in Greece has made an appeal in London for cables to be sent to Premier Papandreou, or to the Greek Ambassador at 51 Upper Brook Street, W1 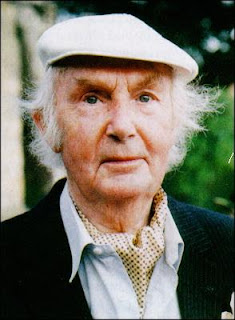 Denzil David Stalford, better known as “Danny” Stalford, was born at Camberwell, South London on the 19th February 1915, the son of Denzil Stalford Snr, who ran a dental practice in Camberwell Green. Danny attended Wilson Grammar school and then went onto undertake his dental training at Guys Hospital, London.

When his father’s practice was bombed during World War Two, the family (he had one brother and two sisters) were evacuated to Horley. Danny was conscripted into the Royal Army Medical Corps and was the leader for a mobile dental surgery based from a lorry and as such was part of the D-day landings.

As a member of the Socialist Medical Association he attended meetings concerned with the formation of the National Health Service. Outline plans for the dental part of the scheme were debated and were eventually adopted into the Act of Parliament. In May 1948 the bill for the new National Health Service was passed and Danny was proud to have been involved and was delighted at the boost it gave to modern dentistry and free treatment to the masses.

After the war he joined the Communist Party and became active in the Socialist Medical association. At the request of the League for Democracy in Greece (1945-1975)he became involved with supporting Greek political prisoners and as such visited in prison and became a close friend of well-known Greek radio broadcaster Dr Kanavos. It was also through the activities of the League that he met his future wife Maria Dracoboulou from Olympia, Greece who he married in 1959.

Danny established, from 1948, a flourishing NHS practice at Carlton, in Burnhurst Road, Horley. And soon established himself as a true friend of the working people of Horley, even paying out of his own pocket for holidays for his less fortunate patients.

Danny and a local GP were also held in high esteem amongst the local travelling community who offered them both the highest degree of respect within their community, Horley. During this period the locality was in the throws of rapid change with massive building and economic developments associated with the growth of Gatwick airport, which the Communist Party was able to tap into.

In the 1960s, Danny first started to stand for the council. By 1964, when he stood as the Communist candidate for the Horley seat on Surrey Rural District Council, he was able to secure 20% of the vote. As he wrote in the Party press at the time: "In Horley and surrounding district we have been building on the democratic work for some years, and achieved a vote of 395 at the last election." In 1967, Stalford increased his vote in the Horley division of the Surrey County Council election to 453 and reaching 9% of the vote. He was now poised to break though into the political mainstream at least in his own community, a position he achieved by sheer personality. By the 1970s he was an elected Communist Councillor for the town, a position he held for six years, regularly topping the poll, such was his almost universal popularity in the town. He held his seat until he became too ill to meet the requirements of the job and retired.

However, the Communist Party’s success in Horley did not go down well with the local Conservatives, who not only tried to change the boundaries of wards to stop him being elected by gerrymandering them, but made life difficult for the Communist Party members in the town.

The Stalford house was not only home to the Dental practice but the hub of Communist and progressive causes (particularly CND) in the town and more generally in this part of Surrey in the 1960s and 1970s, not only had a very high Daily Worker/Morning Star circulation but also a thriving Young Communist League.

Other active Communist Party members in Horley during this period included Ernest Osbourne a painter and decorator, who had fought in the Spanish Civil War, Cyril Granger whose father owned a shoe shop in the town and Irish born Bill Hunter, an aircraft Engineer at British Caledonian Airways.

In 1975 the Dental Practice moved to its present location at Massetts Road, Horley, where his daughter still runs the practice, whilst his son went into the media. Danny continued to be a Communist all his life, however by the end had ceased being a member, dismayed at the infighting that paralysed the Party in the 1970/80s. 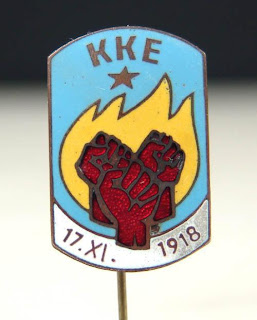 When Danny died in late 1999, after a long illness, there was a massive wave of respect offered to his family from the grateful people of Horley, notably from all political shades of opinion who recognised only too well the work that Danny Stalford had carried out for the people of Horley in making it a better town. After all he was their conscience.

Danny will be sadly missed by his wife Maria, daughter Nikolia son Manolis and his many comrades. 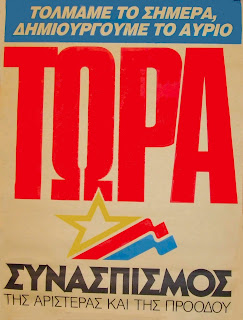